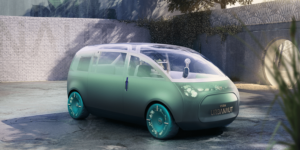 According to a media report, Canoo could produce the electric Mini Urbanaut concept in series in the USA from 2025. Mini is looking for a technical basis and a production site. If found, the series Urbanaut could complement the Mini range as an electric van. But question marks remain.

Mini had presented the Vision Urbanaut in 2020 as an urban electric van concept. The vehicle should consistently take full advantage of the flat electric platform and automated driving functions. Only: BMW does not have a suitable drive platform on which such an electric van could be based without enormous additional costs and compromises.

As Automobilwoche now writes without naming sources, a cooperation with Canoo could solve both the problem of the technical basis and the production. The skateboard platform of the US start-up is designed precisely for such vehicles. In addition, Canoo has plants in the US states of Arkansas and Oklahoma, both of which would be suitable, according to the report. Canoo wants to manufacture up to 80,000 vehicles per year there in the future.

Canoo had recently received larger orders, for example, from Walmart. However, Canoo had to swallow a few bucks for the order for up to 4,500 electric vans: Walmart can take over about a quarter of the company via stock options. Canoo also had to agree not to sell any vehicles to Amazon for the duration of the delivery deal and not to be taken over by the online giant. Canoo had already openly questioned its own future in May: In its first quarter report, it said, “that there are significant doubts about the company’s ability to continue as a going concern”.

So another major order – albeit for contract manufacturing and not the company’s own models – could come at the right time. As Automobilwoche writes, there were already contacts between Canoo and BMW in the past – after all, ex-BMW-i manager Ulrich Kranz was one of the leading heads of Evelozcity, which was later renamed Canoo. However, after Kranz’s departure from the start-up and the change of brand management at Mini this spring, “the project has stalled”. But: “If the numbers are right, the operating systems are compatible and the quality does not cause any problems, the first American-made Mini should definitely have a chance in the Munich boardroom”.

In the Mini product portfolio, a Canoo-based electric van could make perfect sense. With a wheelbase of 2.85 metres and a length of 4.65 metres, the Canoo Lifestyle Vehicle is significantly longer than the Urbanaut concept (4.46 metres), but in this way, the van could keep sufficient distance to the largest Mini model to date, the Countryman. The next generation of the Countryman will be launched in Leipzig with the technology of the BMW iX1, for the first time also fully electric. The platform of the new Mini Cooper as a three-door model comes from China and is designed for small electric cars.

2 Kommentare zu “Mini rumoured to be considering cooperation with Canoo”