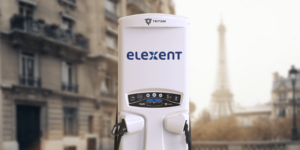 Tritium to supply DC charging stations to Elexent by Renault 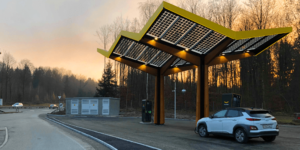 Fastned opens its first fast-charging site in Switzerland and thus includes country number five in its HPC network. The new charging park is located near Zurich on the A1 motorway and offers a charging capacity of 300 kW for up to four EVs simultaneously. 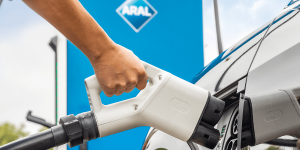 The mineral oil company Aral has announced that it intends to set up more than 100 fast-charging points at its German filling stations within the next twelve months. The expansion is to continue as the oil giant’s long-term planning envisages “several hundred locations”. 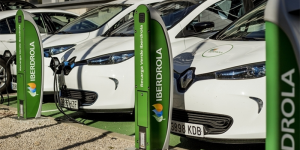 Spanish energy supplier Iberdrola has opened another fast-charging site on one of the main corridors of the Iberian Peninsula. The new site is part of the company’s plan to install 150,000 charge points in Southern Europe.

Living with an EV in the UK is getting easier since Volkswagen and PodPoint teamed up with the Tesco chain over a year ago. The partners announced they have now installed charge points at 200 Tesco superstores, all free to use.

Tesco Ireland, in partnership with ESB, has announced the rollout of dual-outlet electric vehicle chargers at 52 of its store carparks spanning 18 counties nationwide.

Electrify America will cooperate with the Bank of America to install EV charging stations at “select financial center locations across the U.S.” Around 40 charging stations featuring a total 140 EV chargers will be available at select BoA locations by the end of 2020.

BP Chargemaster plans to establish a network of 400 150 kW high-power charging points at BP sites in the UK by 2021, of which the first 100 will be installed at 50 sites this year. Installation is scheduled to begin in July.

The planned installation of 20 charging stations for electric vehicles in the Brussels region has been delayed until the end of April. Unfortunately, the municipal authorities had not taken into account the fact that most of the selected locations could not be connected to the electricity grid from the operator Sibelga. Now new sites have to be found. It’s complicated… 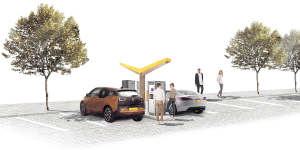 EV drivers in Ireland will be charged for filling their electric cars at public fast-charging stations starting by mid-2019. The change affects the network of the Electricity Supply Board (ESB), a state-owned utility. They failed to disclose any details on pricing. 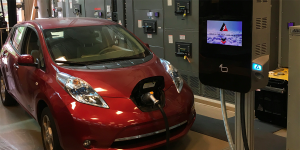 Scientists at the North Carolina State University have developed a particularly small and efficient fast charger for electric cars. Their so-called medium voltage fast charger (MVFC) combines a transformer and charger in one for charging with 50 kW and great efficiency. 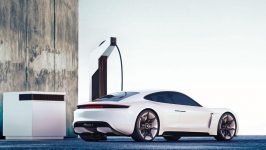 Porsche Engineering has developed a fast charging system with modular building blocks so that it fits charge parks of various sizes and takes into account the grid and visitor frequency. It builds on the 800-Volt technology also used in their high power charging solution. 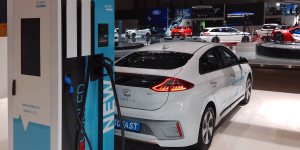 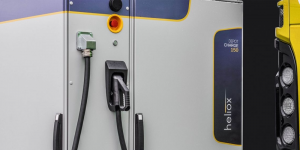 Dutch Heliox who specialises in fast-charging for electric buses is the new partner for Hochbahn, Hamburg’s public transport provider. The latter is in the midst of the execution of what Hochbahn calls their “Masterplan for E-buses”. 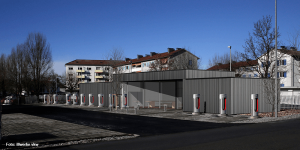 A 20 unit Supercharger station has opened in Austrian Bregenz at the HQ of local utility Illwerke VKW. The firm says it is the largest Tesla charge park in Central Europe and wants to add its own infrastructure.

In California, 652 DC fast charging stations stood when PlugShare counted them in March. The strongest standard is CHAdeMO (324) followed by Tesla (224) and CCS (104). Tesla itself says its Superchargers worldwide have so far provided 29.5 GWh of energy.
transportevolved.com (California), twitter.com (Tesla)

Haste hurts: Structural changes that occur when charging li-ion batteries quickly have been made visible utilising a novel X-ray fluorescence detector. Researchers at DESY together with the German universities of Giessen and Hamburg as well as Australian CSIRO found out that damage to the inner structure of the battery material is clearly evident after only a few charging cycles.
desy.de, phys.org 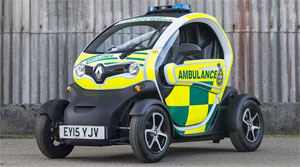 EV modulations by Renault: The French carmaker has brought a modified electric range to the CV Show in Birmingham. The Kangoo Z.E. comes as a Panel Van while the Twizy Cargo has turned into an Ambulance featuring blue lights and a siren.
electriccarsreport.com

Efficient AC for EVs: The TU Munich in their Visio.M concept EV showcased efficient temperature management. Peltier elements in the seats provide heat or cold close to the passengers. Furthermore, the performance electronics are integrated into a holistic thermal management system.
electriccarsreport.com, greencarcongress.com

Dutch electric yacht: Together, VanDutch and Aguri Technologies plan to create an electric yacht range, called Van Dutch E, which will be based on the Van Dutch 40. Still in the concept stage, further details on the electric yacht are not yet known.
mby.com, ntkmarine.com

Click tip: Consumer Reports puts the BMW i8 to the test, singing its praises and saying that it has “the best-sounding 3 three cylinder out there.” Still, it does not compare with the Tesla Model S – just like apples do not compare with oranges.
consumerreports.org (text and video)

Reading tip: How fast can you charge? Inside EVs tries to answer that question by looking at the different DC-charging standards and calculating their power limits.
insideevs.com

Click tip: The website Hybridcars.com lists the top six countries for EV adoption. Their rating is based on accumulated registrations dating as far back as 2003. Just comparing the year 2012 and 2013, the Netherlands lead with a spectacular growth rate of 338%, followed by Norway (129%) and Germany with 105%.
hybridcars.com

Video tip 1: Currently, the BMW i3 is every reviewer’s object of desire. Both ‘Xcar’ and ‘The Verge’ set out to test, if the all-electric BMW would live up to their expectations. The outcome of these first contacts were vividly captured on film and with words.
youtube.com (Xcar video), theverge.com (The Verge)

Video tip 2: In a new video, Chevrolet guides Spark EV owners through the DC fast-charging process, step-by-step. What is essentially plug-and-play comes enriched with information on state-of-charge indicators and even EV charging etiquette. Don’t say, you did not know…
youtube.com