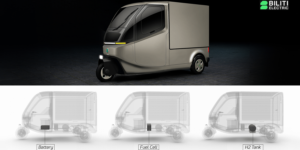 E-mobility company Biliti Electric has unveiled a hydrogen fuel cell electric trike. The ‘FastMile’ takes clues from e-tuk-tuks which are widespread in India but since Biliti is based in California and only rooted in India, they will launch the last-mile FCEV in the US first.

BASF facility in Japan: The chemical company opened its ‘R & D Lab and Application Technology Center for Battery Materials’ in Amagasaki. Its focus is on electrolytes and electrode materials for high-performance lithium ion batteries and is BASF’s first operation of this kind in South-East Asia.
greencarcongress.com

Millennium Tuk-Tuk: The result of a joint effort by Birmingham University, UK and DYPDC centre for automotive research in Pune will be presented at Auto Expo this week. The researchers claim to have designed a four-wheeled hydrogen Rikscha. The “fuel” is generated through solar cells, powering a thermal compressor that splits water into H2 and O2.
sciencedaily.com

Hydrogen Smart: H2-mobil is a project run by South Westphalia University. Their work on converting a Smart into a fuel cell vehicle has been going on for some years and is now bearing fruit. The first so-called H2toDrive is almost ready to enter service in the city of Sundern. To fund the project, operator ProNet Energy is currently looking for 30 sponsors wanting to see their logo on the sides of the fuel cell Smart. In 2014, 30 units will be built for 60,000 euros (81,000 dollars) each, though the price is said to come down at the end of this year.
derwesten.de (In German)

Prius Roadster: Toyota engineers developed the TE-Spyder800 in their spare time, using parts mainly from the Prius and put them on a MR2 base. The resulting plug-in hybrid roadster is working but production is not scheduled – yet.
technologicvehicles.com via earthtechling.com