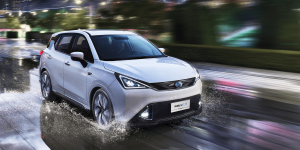 The Chinese vehicle manufacturer Guangzhou Auto is planning to introduce four new fully electric vehicles on the local market by 2020. The first will be an electric Crossover to launch this year.

Netherlands go electric: Dutch economy minister Henk Kamp said in an interview that it is the country’s intention “that from 2035, only electric or fuel cell cars will be sold. So, no more cars that use petrol, diesel or LPG.” Two Dutch parties have meanwhile proposed a ten-point plan to make EVs more attractive to buyers, including the installation of chargers every 25 km, guaranties for EV batteries, lower parking fees and the use of bus lanes.
nrc.nl (interview; in Dutch), nltimes.nl (plan) 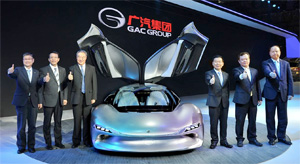 New supercar: Chinese manufacturer GAC Motors has presented an electric sports car concept at the Guangzhou Auto Show. The EnLight features gull-winged doors and the company’s latest technical and design innovations. It has an autonomous, as well as a manual driving mode.
automotive-business-review.com, multivu.com (with videos)

Faraday Future teased: The manufacturer released first teaser images showing the front its first production model. Despite alleged financial difficulties (we reported), the EV is said to be fully unveiled at the CES in Las Vegas next year.
electrek.co, insideevs.com

Too hot to handle: Because of possible overheating, Tesla issued a voluntary recall of some 7,000 select NEMA adaptors. There have been two reported cases of the plugs overheating while in use, but it caused no further damage and no one was harmed. NEMA adaptors come with Tesla’s Universal Mobile Charger (UMC) in order to fit different outlets and are mostly used in the U.S., Canada and parts of Asia.
electrek.co, transportevolved.com, tesla.com

No more Outlander PHEV for Russia: After only 71 units sold in 2014 and a mere 21 in 2015, Mitsubishi has decided to stop offering plug-in SUV in Russia. Interestingly, the standard Outlander accounts for two-thirds of Mitsubishi’s sales in the country.
insideevs.com

Energica update: The Italian electric motorcycle manufacturer has obtained a sales license in California, meaning Energica can now record sales in the U.S. state. The company also added an importer in Israel, and important market for the Italians.
prnewswire.com 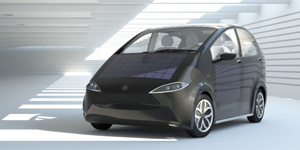