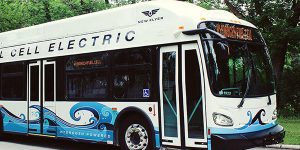 Hydrogen for the East Coast: On the occasion of presenting its Mirai, Toyota revealed plans to erect twelve hydrogen fueling stations together with Air Liquide in the states of New York, New Jersey, Massachusetts, Connecticut and Rhode Island where the Mirai will be sold from 2016.
hybridcars.com

H2 buses for Europe: EvoBus, MAN, Solaris, Van Hool, VDL together with bus operators from major European cities such as Hamburg and London have signed a joint Letter of Understanding for the commercialisation of fuel cell buses. 500 to a 1,000 are said to be deployed across Europe by 2020.
greencarcongress.com, itm-power.com, fch-ju.eu

Clever charging: Danish eMobility provider CLEVER announced its plan to build 263 new fast charging stations in its home country. By the end of 2015, a total of 543 charge points are thus to be made available, offering charging with 22 kW, 43 kW, and 50 kW in Denmark.
insideevs.com, clever.dk

Electric car sharing in China: Kandi announced the delivery of 64 Kandi EVs to the city of Wuhan in the Hubei province. The car sharing programme is operated by ZuoZhongYou Electric Vehicle Service, a Kandi subsidiary. By the end of this year, delivery of up to a 1,000 Kandi EVs is expected.
globenewswire.com

Iceland to be electrified: Canadian Sun Country Highways has set its eyes on its nordic “neighbour” and plans to set up free EV charging stations along Iceland’s roads. The initiative will go ahead together with EV importer EVEN and is said to take less than twelve months.
green.autoblog.com

County police goes all electric: Athens-Clarke police in Georgia has now added a Nissan Leaf to its existing fleet of 18 hybrid Toyota Priuses and Ford Fusions. The leased Leaf will be used by administrators rather than officers on patrol.
onlineathens.com