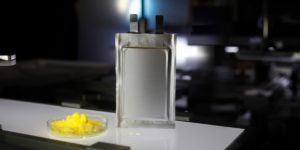 The British company Oxis Energy has announced that they have improved the energy density of their lithium sulfur battery cells for use in electric aircraft to 425 Wh/kg. By the end of 2019, the manufacturer intends to increase this number to 500 Wh/kg with the help of selected partners.

E not Evo: Mitsubishi will not launch a new generation of its Lancer Evolution with combustion engine. Instead, the carmaker wants to focus on ‘high performance’ vehicles with electric drives. We cannot wait!
autoweek.com, autoblog.com

Cameras instead of mirrors: Tesla and the Alliance of Automobile Manufactures (including GM, Toyota and VW) want to replace a car’s side mirrors with cameras. A formal request has been handed in to the National Traffic Safety Administration.
autonews.com, greencarreports.com