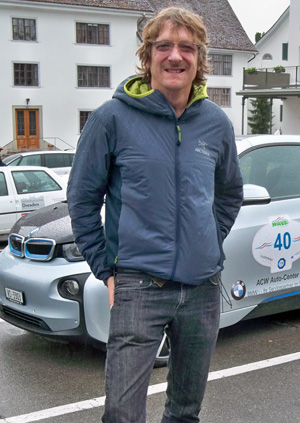 “The industry will not let it die again,” Chris Paine says about electric vehicles. The American filmmaker is known for his documentaries “Who Killed the Electric Car” (2006) and “The Revenge of the Electric Car” (2011). Obviously a big fan and supporter of EVs, he took part of the Wave Trophy 2014, where he met up with our editor Marc Kudling to talk about the past, present and future of electric mobility in an exclusive interview:

Why did the electric car have to die at the turn of the century?

There are at least a dozen reasons. But if you put them all in a movie, you’d lose your general audience. It would just be too long. So we focused on 7 reasons – and almost none of them had anything do with the electric car! It was a disruptive technology on a core level. By 2003, the technology had threatened too many foes and it needed more time to gather some strength. 4 other culprits would have been: the press, corporate lawyers, low gas prices, and fear of change. In short, those electric cars were terrific- but they also threatened a lot of old habits and industries and were destroyed almost in secret.

Why has its “rebirth” been so successful?

This time the cat is out of the bag and it is not climbing back in. The technology is just too good and the advantages like shifting off gasoline, driving experience, the ability to drive with renewable energy and decreasing prices make this trend almost impossible to stop. Other factors helped — higher gas prices, entrepreneurs like Elon Musk, and even boredom with conventional cars from consumers. GM’s bailout and the prices of lithium batteries dropping were also big factors. Even carmakers understand their days were numbered if they didn’t start innovating and getting on the band wagon. The debate is still ongoing, which is why we need to keep pressure and consumer support vibrant.

Which technology do you see as being the future: a battery-operated drive train or the hydrogen fuel cell that the Japanese are pushing for?

I still believe the fuel cell is hype driven by true believers and the fossil fuel industry. There is still no way to make hydrogen that is as efficient as using electricity in batteries and almost all hydrogen creation is from natural gas reforming. One reason oil companies like hydrogen is that they want to keep electricity as a fuel that they can ship in trucks and sell at service stations. Is this the best model? Electricity in batteries means you can stabilize the grid with V2G and charge at home or work most of the time. You don’t need a million dollar service station or an oil company involved unless they want to get into the quick charge EV business, which I hope they will. There is a good argument for hydrogen fuel cell in long distance trucking. But even here there is already a Swiss-made long-range battery powered truck that seems a lot more efficient then fuel cell.

What do you think about the models being produced in Germany right now, like BWM, VW, and Daimler?

I think it’s fantastic. I sat in the BMW i3 for the first time today and it’s great to see BMW design at work. Then there’s VW’s Golf, and Mercedes new vehicle with a Tesla powertrain and I’m sure that sounds awesome. For a long time Germany was focused on efficient blutec diesel but now the big players are moving into electric. 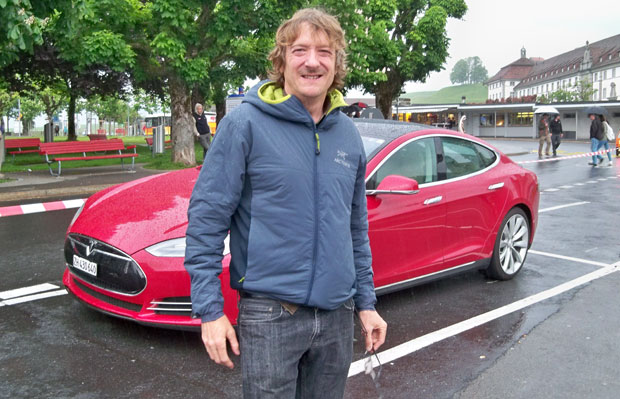 Switching continents – will Tesla be this big in the future or will the start-up loose its momentum?

That all depends on how you define ‘this.’ If you read the American press about Tesla, one day there is a disaster and the next day, they are superheros. Then a disaster and then superhero, and so on. Press sells drama especially when technology is new and disruptive. The real story is that Tesla is re-making the car industry from disrupting the dealer-model for selling cars to creating relationships with customers around electric mobility. I expect they will continue to be financially successful, because they are taking big but prudent risks. And they have one key ingredient – Elon Musk.

Do you think Tesla is like Apple and could lose its certain something if Elon Musk were not running it?

Elon is a mad genius, who is also very sane. A master of technology, financing, design and sometimes even the press. He has a great team, too. Many of them are now pros and his financial people understand that you can make money with electric cars — so Tesla has a lot of momentum. And yes, Tesla is on good track to be the Mac of automobiles. Even if Elon steps down as CEO, they have a lot of momentum and the core reasons for that extend well beyond any one company. What’s hard for these start-up companies are capitalizing the first years. They are through that hurdle.

Your movie “Revenge of the Electric Car” puts Tesla at the centre of the revolution. Do you think that without the company, the electric car would have died again?

We made a “Revenge of the Electric Car,” because after killing their electric car, General Motors went bankrupt and even killed its Hummer brand. But the movie turned out – as you said – to have Tesla at its centre. It’s a movie about entrepreneurship, and different kinds of leadership within or outside modern corporations. That transcends revenge. Revenge is dish best served cold, and this whole story keeps heating up.

Thank you, Mr. Paine, for taking the time for this interview.

Watch the trailer of Chris Paine’s “Revenge of the Electric Car”: