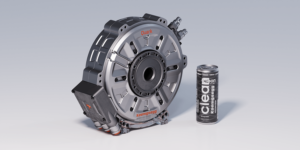 The Swedish sports car manufacturer Koenigsegg has presented a self-developed electric motor as well as an electric drive unit. The electric motor, named Quark, generates 250 kW and up to 600 Nm of torque – at a weight of only 30 kilograms.

Radial flux motors are still very rare; such a motor was used, for example, in the hybrid system of the LaFerrari. Mercedes took over the British e-motor specialist Yasa last year and plans to assemble Yasa-designed radial flux motors for its upcoming high-performance electric car at the Berlin-Marienfelde plant.

Commenting on the ‘Raxial Flux’ approach, Koenigsegg states that this topology offers “the industry’s best torque to power to weight ratio”. “The Quark is designed to bolster the low-speed range of the Gemera, where you need it, for brutal acceleration,” says Dragos-Mihai Postariu, electric motor design manager at Koenigsegg. He adds that the combustion engine in the Gemera focuses on the high-speed range. “What this means in terms of performance for the Gemera is a big power surge followed by a continuous record-speed push to 400 km/h without any torque or power losses.”

To keep the weight down, the shaft is made of 300M steel, which is well-known in motorsport and aerospace, while the rotor is made of carbon fibre. According to development manager András Székely, direct cooling was chosen for efficiency and compact design. Without the special functions for the Gemera, he says, even a weight of 28 kilograms is possible.

The name quark alludes to the quarks elementary particles. They are the only particles that experience all four fundamental forces (electromagnetism, gravitation, strong interaction and weak interaction). “Given how it also relates to the mystery of magnetism, the name Quark rendered itself well for a novel E-motor design,” the company wrote. For the motor, it said, the fundamentals of magnetism, materials, cooling and packing were looked at in a new way, rather than following the norm.

Christian von Koenigsegg, CEO and founder of the carmaker, emphasises the interplay of torque, speed, power and weight. “This means, when using the Quark in applications such as marine, aircraft or VTOL, there is no need for a step-down transmission, instead direct drive can be achieved, as the RPM of the motor is right from the get-go,” says the CEO. “Small high-revving motors can have higher peak power to weight ratio, but they need transmissions in most applications in order to get to the desired output rpm and torque, causing energy loss and adding weight and complexity to do the same job. So any benefit in size is lost.”

While the company is also considering other uses, as mentioned, its main focus is on high-performance sports cars. For this, Koenigsegg has integrated two of the electric drives together with an inverter and planetary gearbox to create an EV torque vectoring drive unit called the Terrier. The inverter, named David, is a six-phase inverter that can independently power each Quark motor with three phases. The Koenigsegg Gemera, the manufacturer’s first four-seater, uses three of the electric drives as part of a hybrid drive system. The special feature is that the approximately 450 kW combustion engine does not have a gearbox either – in the lower speed range, the electric motors take over.