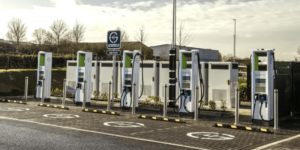 In the UK, Gridserve has opened its first Electric Super Hub of 2023 at Solstice Park in Wiltshire, providing eight 350kW chargers to boost charging capacity for passing electric vehicles on the A303 near Stonehenge.

The A303 is a key route from London to holiday hotspots in Devon and Cornwall. Gridserve says the new Electric Super Hub will provide fast, hassle-free, reliable charging to millions of tourists each year. The Electric Super Hub contains eight CCS connectors and four CHAdeMO connectors, as well as a larger bay to help with accessibility.

Gridserve currently also has Electric Super Hubs under development in Exeter and Cornwall. In August last year, Gridserve secured a £200m investment from Infracapital (about 237 million euros). The company is investing fresh capital into expanding its national charging network of its Electric Forecourts and Electric Hubs.

356 Lincoln dealers in the US to install chargers onsite