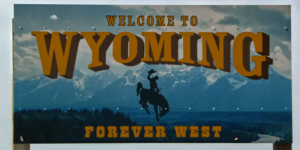 In the US state of Wyoming, the recently introduced resolution titled ‘Phasing Out New Electric Vehicle Sales By 2035’ already has strong support from members of the Wyoming House and Senate.

While it may read like a joke, it appears the resolution may indeed be not entirely serious and “most likely nothing more than a cry for help,” as InsideEVs writes. Politicians are concerned about jobs in the oil and gas industry, which they see as being threatened by the shift to electric vehicles.

The resolution by politicians from the US state of Wyoming, which became known a few days ago, with the aim of stopping the sale of new electric vehicles by 2035, has already failed – among other things due to the resistance of car dealers.

The initiators now also admit that the resolution was indeed not really intended to ban electric vehicles. The main purpose was to make a statement to states such as California and New York, which will ban the sale of combustion vehicles from 2035.

The resolution would also not have had the legal force of a ban. Still, there was a discussion in the Senate.

Sen. Chris Rothfuss, D-Laramie, challenged the concern raised by some committee members that the adoption of EVs is a threat to Wyoming industries, including coal, oil and gas.

They still require energy, he said, which will be in even higher demand as EV use continues to grow.

“It’s exactly the type of challenge that Wyoming stands to benefit from, because we produce all types of power,” Rothfuss said.

The vehicles also require lithium and rare earth minerals, of which Wyoming has large deposits.

Speaking after the committee meeting, Rothfuss told Cowboy State Daily that there’s an opportunity with EVs that the resolution failed to grasp.

With reporting by Chris Randall and Nora Manthey.