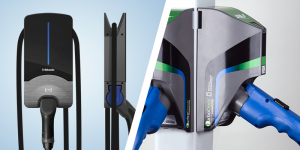 Webasto is acquiring the electric car charging and testing business of AeroVironment, grouped under the Efficient Energy Systems (EES) division. The acquisition will cost the German supplier 35 million dollars and is still subject to approval.

Portable compact charger: AeroVironment introduced the TurboCord, a portable charging cordset. TurboCord is available in a 240-volt only version for 599 dollars or as dual mode for 649 dollars. The compact charger plugs directly into the socket and gathers all miniaturised electronics in a box right at the wall end of the cord.
greencarcongress.com

Electric Route 66: The Historic Electric Vehicle Foundation (HEVF) entertains the idea of installing EV charging stations along the legendary highway also dubbed the ‘Mother Road.’ However, the project is at a very early stage as no details are yet known on who might pay for or install the chargers.
green.autoblog.com

West-to-east-trip complete: Two Tesla teams have just completed a cross-country journey with the Model S going from Los Angeles to New York. Thanks to the network of Tesla’s Superchargers it took them only 76,5 hours to cover almost 3,500 mi.
teslamotors.com