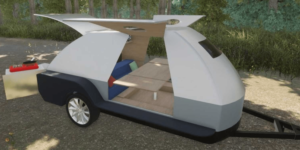 The US company Colorado Teardrops is introducing a camping trailer specially designed for use with electric cars. The trailer called Boulder also has 75 kWh of battery capacity that can be used to charge the electric car’s battery while stationary.

Supercharging Europe: Tesla just opened two new Supercharger locations in Austria and Germany. One is located in Austria’s capital Vienna, while the other is suitable located to connect between the two German mayor cities of Berlin and Hanover.
twitter.com (Photos), teslamotors.com (Austria), teslamotors.com (Germany)

Trolleybus batteries: Voltabox, a U.S. subsidiary of German paragon AG, has received a major order for the supply of at least 200 back-up battery systems to be used in combination with Vossloh Kiepe powertrains. Up to 530 of these buses will be put in service in Seattle and San Francisco.
globenewswire.com

Electric logistics: The E-LOG project in Klagenfurt, Austria, aims to set up a decentralised logistics centre to support the use of 200 commercial EVs. The vehicles and charging infrastructure will be commissioned by logistics and service businesses to serve 150,000 residents in the area. Solar panels on the roof of the logistics centre will provide as much as 600,000 kWh annually to power the cars. Almost all of the project vehicles will be EVs made by Renault.
kaernten.orf.at (in German), klimafonds.gv.at (vehicles, in German)

There is no such thing as free charging: Often, the use of charging stations is free to those charging, but what about the real costs of installing a station? Cleantechnica did some research and put together the numbers for the U.S. As you might have guessed, DC chargers are the most expensive.
cleantechnica.com