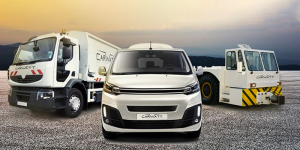 The airline Air France announces a cooperation agreement with the French battery recycling start-up CarWatt. The partners aim to replace diesel engines in vehicles used to load and unload luggage with EVs made from recycled materials, including 2nd life batteries.

Formula 1 goes electric: McLaren has unveiled its vision for a Formula 1 car of the future. The MP4-X concept uses electric power instead of an internal combustion engine and thin batteries integrated into the vehicle’s crash structure. These could be charged by solar panels on the car, energy recovered from regenerative braking, and also inductive charging loops embedded in the track surface.
autocar.co.uk, wired.com

Container handling: Kalmar has announced the first fast charging solution for electric powered shuttle and straddle carriers. The Kalmar FastCharge features a pantograph DC charging system with a maximum charging power of 600 kW. Kalmar is planning to bring the solution to the market next year.
industrialprime.com, kalmar.de

Platinum alternative: HyperSolar and researchers at the University of Iowa have developed a new catalyst material that the company believes will significantly reduce the cost of producing hydrogen fuel using its renewable water-splitting process. The material is a sulfide-based photocatalyst using only earth abundant, non-toxic and inexpensive materials, which can allegedly outperform platinum.
marketwired.com