400 Nissan Leafs have been acquired by Avis Denmark, thus boosting the Danish EV market by 60%. With the support of the Danish Energy Agency, the rental car company will be able to offer the electric cars for only 3,495 kroner (642 dollars) per month. Also, the installation of a charging station on the business’s premises is possible with this ‘mini-lease.’
electriccarsreport.com 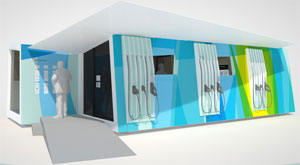 ChargeLounge: The name of Fraunhofer IAO’s latest concept says it all. It offers all four quick-charge standards – CCS, CHAdeMO, Tesla and Type 2 in one place, as well as a space for EV drivers to relax, use WiFi or even schedule meetings. The ChargeLounge premiers at the Hannover Messe today. Ten prototypes will then be tested under real life conditions before being available in Germany, Austria, and Switzerland in 2015. Fraunhofer plans to install 600 stations by 2020.
thegreencarwebsite.co.uk, transportevolved.com, chargelounge.de

Hubject goes to Scandinavia: The latest addition to the e-roaming platform is Fortnum. The Scandinavian utility provider plans to integrate its charging stations in Norway, Sweden and Finland to the Hubject platform. This will grow the pan-European intercharge network by 150 stations.
hubject.com (press info)

Electric Highway to be improved: UK utility company Ecotricity announced it will double its CHAdeMO charger network along the British motorway M4. Additionally, the Electric Highway is said to be equipped with CCS DC quick chargers. Ecotricity further pledged to improve reliability by exchanging faulty parts and upgrade all existing stations.
transportevolved.com