London Taxi Company opens UK plant: 20,000 electric cabs with range extender can now be produced every year in Ansty close to Coventry. There, the London Taxi Company opened its facility for the TX5 with 300m pounds from its Chinese backers Geely. The new electric model replaces the legendary black cab, FX4 whose design dates back to 1958. The electric taxi will go on sale this autumn in Great Britain, with the first market being London, where all new cabs must be zero emission capable by the start of 2018. European distribution may begin early next year and the firm hopes to appeal to cities worried about pollution and with an eye for icons.
autocar.co.uk, businessgreen.com

Made for municipalities: Electric van ELI has been designed for municipalities in Austria by local SFL Technologies and is now in serial production. For the start, 1,000 electric vans will be made a year but capacity is to double by 2019. Rather than for sale, ELI is for hire and will be rented out to municipalities as part of a service package with a monthly starting fee of 1,1250 euros before federal incentives that decrease the price to 835 euros. ELI has a range of up to 110 km and can carry 980 kg. Plus, it adapts to various tasks like transport or snow ploughing.
electrive.net (in German)

EQC will be the name of Mercedes’ first model under the EQ label. It can be expected by 2019, the MB Passion blog reports, quoting the in-house Mercedes Benz magazine.
mercedes-benz-passion.com (in German)

The Battery Show – Europe’s trade fair for automotive battery manufacturing and design opens in Sindelfingen, Germany, 4-6 April 2017. Source cutting-edge materials, equipment and components from 200 exhibitors and network with 3,000 attendees from OEMs and tier 1, 2 and 3 suppliers. Register for a free expo pass.

A new round of referrals has begun at Tesla and this time the programme includes invitations to the Model 3 “Delivery Event,” Gigafactory and SpaceX tours as well as a Tesla Model S and X, a special edition Powerwall and a Model S for kids. The scheme ends on June, 15.
insideevs.com

Searching for synergies: Mitsubishi has delayed the new Outlander by a year as it moved the launch to 2020. The company claims the search for synergies with Nissan as the reason and engineers are now looking into sharing components and architecture between the companies.
autonews.com

Unwell: LeEco co-founder and China and Asia-Pacific chief executive for the company’s EV division has resigned, citing health reasons. Already last December, Ding had stepped back from his post as Faraday Future CEO. He will remain a strategic advisor for the company’s ecosystem research centre.
scmp.com 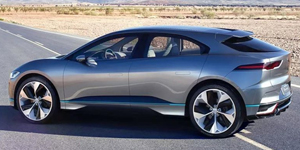