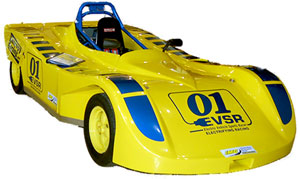 E-racer for everyone: Entropy has presented its EVSR, an electric race car which is supposed to be offered to non-professional club racers along with additional coaching and management. The company has already competed against petrol-powered competitors at Pocono Raceway with two cars finishing at an overall 8th place. The EVSR is set to come to market by 2015.
green.autoblog.com

Silk Road 2: This is the codename of a joint project by Toyota and BMW. According to British Car magazine, the Silk Road 2 is planned as a two-seat mid-engine sports car which will also be offered as plug-in hybrid by 2018 or 2019. That would be just after Porsche’s 911 plug-in debut.
carmagazine.co.uk, caradvice.com.au

Bentley teases: The British brand’s first SUV due in 2016 has now been spotted though heavily camouflaged. At the same time, Bentley has set up a new microsite with more teasers for the new model which will also come as a plug-in hybrid.
motorauthority.com

Nissan Leaf recall: A total of 196 electric cars build in April are affected by a new recall. The Leafs are called into the workshops to exchange the inverter which has been fitted with a faulty circuit board. Nissan has already contacted the owners of the vehicles in question.
greencarreports.com

The Tucson Fuel Cell has arrived in California where the first car has just been handed over to the first customer. Hyundai is offering its H2 Tuscon in the sunshine state and for lease customers only. The monthly rate is at 499 dollars on a 36-month contract and already includes unlimited free hydrogen refilling.
electriccarsreport.com

Ford Fusion Energi review: Josh Miller takes a detailed yet perfectly structured look at Ford’s plug-in hybrid which he sees as the company’s “stepping stone to electric cars.” With 7.6 kWh of battery capacity, the Fusion bares an EPA rating of 21 all-electric miles.
cnet.com