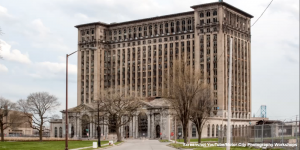 Ford has come up with what seems to be a bit of a double-edged plan as they want to turn the Michigan Central Station located in Detroit into a hub for the automaker’s electric- and self-driving car activities.

New UK charging network planned: EV Hub wants to set up a charging network at supermarkets and cafés in the UK. It is currently looking to collect 500,000 pounds via crowdfunding to kick start its project in London, which will then successively expand to other parts of the country.
thisismoney.co.uk

Sells like hotcakes: Kandi has signed another deal, this time with Pang Da Automobile that ordered 60,000 EVs that will be delivered over the next four years. The electric cars will be stationed at universities across the country.
globenewswire.com

Seattle plugs in: Utility Seattle City Light will install 20 new rapid-chargers, as well as set up charging at several hundred private homes. Previously, the company had announced plans to set up 10 fast-chargers.
seattletimes.com

Electrifying Dubai: The UAE’s biggest city wants that by 2020, at least two percent of all new cars registered there will be electric of hybrid – a number said to grow to 10% by 2030. Meanwhile. Dubai’s taxi service Careem is working with Next Future to set up a shuttle service with self-driving electric pods.
tradearabia.com, timeoutdubai.com (pods)

Public electrification: Thanks to federal grants, Portland is looking to purchase four all-electric New Flyer buses and the corresponding charging infrastructure. Service will start in 2018. The city of Everett, located in the U.S. state of Washington, has received 3.4m dollars in grants to replace four older buses with electric ones from Proterra.
patch.com (Portland), heraldnet.com (Everett)