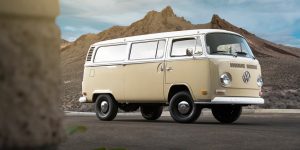 The conversion specialist EV West has electrified a classic VW minibus on behalf of Volkswagen of America. The retrofitted classic car – officially VW Type 2 T2 – will be powered by the series production engine and the 35.8 kWh battery system of a 2017 VW e-Golf.

Reading tip: Battery prices may fall by 40% in China this year as the country’s manufacturers try to counteract Beijing’s cutback of EV subsidies. Margins will only be slashed on batteries sold nationally.
greentechmedia.com

Video tip: In a “tear-it-yourself” video, Jehu Garcia and EV West show how you can extract modules for other projects, like EV conversions or energy storage, from a Tesla Model S powerpack.
youtube.com

Video tips: Mitsubishi has been busy shooting numerous videos to promote its Outlander PHEV. The series ranges from driving tips over app functionality to charging the hybrid SUV. Even London’s major Boris Johnson took a little spin – without much of an introduction.
youtube.com (Boris Johnson), youtube.com (Mitsubishi TV)

Video tip II: EV West’s Michael Bream here goes into detail on how to convert gas guzzlers to electric cars as the professionals aim to spread the word on “how to” among enthusiastic amateurs. The Pro’ s are currently converting a Ferrari 308 and say “it is all about making the car better.”
youtube.com via insideevs.com

Video tip I: In the US, Toyota has launched a new video campaign for its Prius. In the videos, different Prius owners tell their story on the reasons for going hybrid. A real family portrait!
forbes.com, youtube.com

Video tip II: In this video, EV West introduces its latest electric conversion of a low speed neighbourhood van together with technician Trent, the company’s newest addition to the team. Even though this low speed conversion seems to be kind of boring, the team surely had fun shooting this walkthrough video.
youtube.com

Reading tip I: If EV West is doing something, it does it right and so the ev-conversion company has found, that the best conversions, are full conversions – fully electric that is. Their most famous conversion certainly is the Pikes Peak winning BMW M3. Check it out!
evo.co.uk

Reading tip II: Peter Kelly-Detwiler is taking an expectant look at the strong EV sales in the U.S. for the first half of this year (up 33%) and wonders if this growth will even be stronger in the months to come. While the Leaf is in the lead, Tesla sales have taken a slight slope.
forbes.com

Video tip I: Aptly name “Quality,” BYD published a video on its rigorous testing methods – in a rather stylised manner…
youtube.com via insideevs.com

Video tip II: EV West built the tablet-controlled electric 818 for Factory Five and 33 Machine. Hold on tight, you are in for a ride!
youtube.com

Study tip: Navigant forecasts a growth rate of 23.7 percent for plug-in electric vehicles worldwide and expects to see more than 2.7 million PEVs on American roads by 2023.
navigantresearch.com via electriccarsreport.com

Geely and Volvo getting even closer: Apparently, the two companies are discussing to set up a joint research and development centre with a focus on electric drive systems and their manufacture. A timetable has not been set yet.
scandasia.com

3D-printed superbike: Most parts of the Energica Ego were 3D printed before they are put together to form a fully functioning electric motorcycle. The Italian-made Ego is said to reach speeds of up to 150 mph. Sales launch is set for 2015 with prices starting from 22,000 euros (30,000 dollars).
gas2.org (with video), 3diot.net

Oldtimer electrification: EV West specialises in electrifying classics. The company offers conversion kits for 16 models, among them the Beetle, Porsche 911, Karmann Ghia or the more recent Mazda MX 5. The kits cost under 7,000 dollars not including the battery.
technologicvehicles.com