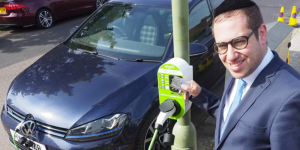 Barnet Council has installed the first 40 lamp column charging points for electric cars. The London borough plans to launch a further 40 in autumn as part of the Air Quality Action Plan and Long Term Transport Strategy.

Over 200 public electric vehicle chargers will go up on lampposts in London’s green borough of Richmond, provided by Ubitricity. The project was funded with a £300,000 grant from the Go Ultra Low City Scheme run by the Department for Transport.

British Char.gy announce the installation of their first charge point in London. Their technology uses existing connections at street lamps. Char.gy is one of four providers contracted to increase on-street charging option across the UK capital.

Cash injection for British e-mobility: The cities of London, Milton Keynes and Bristol have qualified as “Go Ultra Low Cities” and will receive a total of 40m pounds in funding for rapid-chargers, as well as street lighting that doubles as chargers. The cities will also set up an Electric Vehicle Experience Centre, free parking for plug-ins and allow EVs to use bus lanes.
gov.uk, bbc.com, independent.co.uk

Japanese H2 experience: Together with Honda and other partners, Japanese prefecture Tottori wants to set up a hydrogen demonstration project. It will include a smart home, a solar array for the production of hydrogen, and a hydrogen filling station for the Honda Clarity FCV.
greencarcongress.com

GM to expand experimental carsharing: The carmaker wants to increase its fleet of shared vehicles as part of the “Let’s Drive NYC” initiative. There are currently 10 cars at one property in the New York, and GM looks to include a total of 24 locations where it may also offer its Volt and Bolt EVs.
bizjournals.com

Solar chargers for Europe: Envision Solar has founded a European subsidiary together with Aconfort, called Envision EU. Together they want to make the patented EV ARC chargers available for the European market.
renewables.seenews.com, money.cnn.com