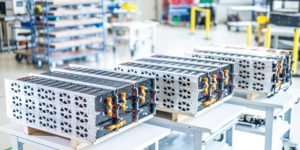 Following John Deere’s acquisition of a majority stake in Austrian eMobility specialist Kreisel Electric, the US agricultural machinery manufacturer is investing in two additional sites with immediate effect to expand the production capacities of Kreisel batteries for electric and hybrid drive systems by more than 2 GWh. 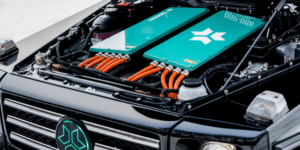 The US agricultural machinery manufacturer John Deere has acquired a majority stake in the Austrian eMobility specialist Kreisel Electric. Kreisel will continue to operate under its own name, but John Deere has secured access to the Austrian company’s battery and charging technology.

John Deere has unveiled the concept of an all-electric backhoe, a type of digger, at an early stage of development. The manufacturer not only wants to promote electric vehicles in agriculture but also on construction sites in the future. 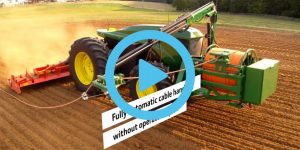 John Deere wants to establish electric drives in agriculture. The agricultural machinery manufacturer is now showing a world premiere: a fully electric, autonomous tractor in operation on the field. Electrive.com was given an exclusive release.

Fuel cell REx by Magna: The Canadians have an electric van concept on the stand in Switzerland that uses fuel cells to extend the range. Magna’s FCREEV is based on the Mercedes Viano with a 30 kWh fuel cell stack coming from Proton Motor. The battery holds 16 kWh and serves for about 70 km of the total range of 350 km. The concept is not scheduled for production but serves Magna as mobile shop front rather. While the company said it sees “big potential” in the future, prices for both fuel cells and batteries are too high to be competitive at present.
autonews.com, magna.com (in German)

Techrules presents the production-ready Ren with turbine range extender in Geneva as promised previously. The sports car delivers up to 960 kW and has a range of 1,170 km, according to its Chinese creators. Production is to start by 2018 in a limited run of 96 track versions that can be ordered now. The Ren has a six e-motor set-up and offers three battery options (14kWh, 25kWh, and 32kWh) as well as two different turbines. The company plans to use tech components of this rather showy car that was designed in Italy in future models that could range from SUV to small city cars.
autocar.co.uk, electriccarsreport.com

Aston Martin Valkyrie is the name Aston Martin and Red Bull chose for their hybrid racer, that was known AM-RB 001 before Geneva. Audi CEO Rupert Stadler took the opportunity to open rivalries on the spot when he considered Audi’s very own hypercar.
carscoops.com, autocar.co.uk (Audi)

Hybrid digger by BMW: John Deere developed an excavator with the support of BMW’s subsidiary Designworks. Their concept is called Fixstern Backhoe and is currently on display at the CONEXPO-CON/AGG show in Las Vegas.
autoblog.com, bmwgroupdesignworks.com

Apple confirms autonomous car plans: In a letter to U.S. transport regulators, the tech firm for the first time acknowledged that it is working on self-driving technology. It urged the National Highway Traffic Safety Administration (NHTSA) to not introduce too many regulations on the testing of the technology and proposed that companies share data from i.e. crashes to make the autonomous driving even safer.
bbc.com, arstechnica.com

New e-tractor in town: John Deere unveiled a prototype of its new electric tractor SESAM (Sustainable Energy Supply for Agricultural Machinery). The machine features two electric motors with 150 kW each and a 130 kWh battery pack. The tractor is said to require less maintenance and last longer than its diesel equivalent.
electrek.co, youtube.com (video)

Cash injection: Skype co-founder Niklas Zennström has invested 100m dollars in Munich-based start-up Lilium. The latter is working on a two-seater electric jet (we reported), ready to take flight by 2018. Range is estimated at 500 km while the jet’s top speed is set at 400 kph.
businessinsider.de

Tell it where to go.

Engineer Paulo Camasmie has built his own autonomous electric vehicle in his garage, which he does plan to sell later. And to get from a to b? Just tell the Atticus what you want it to do and where you want to go. It will even run errands for you.
jalopnik.com (with videos)