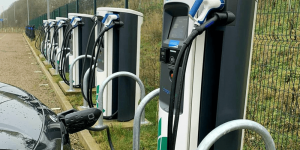 A project to install 150 on-street charging points in Lancashire, in partnership between BP Chargemaster and Lancashire County Council, is nearing completion and reached a milestone this week with the opening of a new charging ‘super hub’.

UK to escalate action against diesel cars? Drivers of diesel cars could soon face “toxin taxes” on a daily basis in 35 cities of the Island. The Sunday Times quotes a 20 pound fee per day, referring to the plans of the British government that have yet to be officially announced. Ten cities may seek a total diesel ban, while others ponder a crack down on days with high air pollution or during peak hours. All in all, up to 10m diesel cars could be affected.
thetimes.co.uk via businessgreen.com

Romania doubles EV bonus: Romanian car owners, who exchange their gas guzzlers for electric vehicles can now calculate with a remarkable 10,000 euro rebate. The government decided to double its previous EV incentive through its Rabla Plus programme, that is limited to 1,000 EVs.
electriccarsreport.com, giurgiuveanul.ro (in Romanian)

EV infrastructure in the UK: Lancashire in the UK’s Northwest set up a scheme to install 150 EV charging points across the region. For an investment volume of 4.6m pounds, electric car infrastructure is to get installed in Burnley, Accrington, Clitheroe, Rawtenstall, Nelson, and Chorley. Meanwhile, West Yorkshire is to build 88 charge points for use by taxis and private hire companies. The EV charging stations shall stand at public transport and taxi operations.
lancashiretelegraph.co.uk (Lancashire), thebusinessdesk.com (Yorkshire)

India discontinues mild subsidies: The Indian government has excluded mild hybrid vehicles from incentives given under the FAME scheme. Especially the country’s largest carmaker Maruti Suzuki India had benefited and will feel the discontinuation’s impact the most. Subsidies for PEV remain.
timesofindia.indiatimes.com

Grants on hold: The California Clean Vehicle Rebate programme has, again, been exhausted and all applicants are waitlisted. Though funds had been earmarked specifically for the programme, some suspect the money is being withheld in order to incentivize law makers to reach a deal this summer on whether or not to extend the cap-and-trade programme.
insideevs.com

Chattanooga carsharing: Chattanooga, Tennessee, will soon be home to an electric vehicle carsharing programme. The cooperation between CARTA, EPB, TVA and Los Angeles’ Green Commuter has already overseen the installation of twenty charging stations and will launch up to 20 Nissan Leaf next month.
nooga.com

Lancashire chargers: The UK’s Lancashire county will be spending over 14m pounds to build 150 charging points in the area. The chargers are expected to be erected by March 2018, with one third being built in East Lancashire. First charging points will be set up early 2017.
thelancasterandmorecambecitizen.co.uk

16 BYD buses: BYD has announced orders for 16 of its new pure electric buses and coaches to French operators B.E.Green and the Nedroma Group.
bydeurope.com