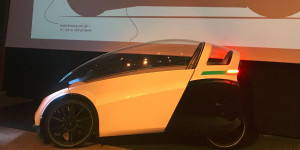 Elpedal of Norway has introduced a prototype pedelec with a twist. The so-called Podbike features four wheels, pedals, a drivers’ cab and a removable battery. Moreover, it has a dual-motor chainless setup, which has also been dubbed a rolling chassis.