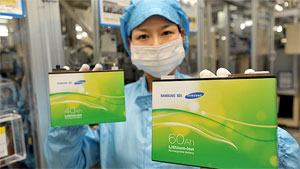 New battery factory in China: Samsung SDI officially opened its latest battery facility in Xi’an in Shaanxi province. Operation was initiated in September with a planned annual output of power packs for 40,000 EVs. Samsung expects to invest another 600m dollars in the factory until 2020.
businesswire.com

Hot Cafe-Racer: Saroléa presents the Manx 7, an electric racer homologated for street use. It hopefully keeps its full carbon bodywork and is expected to deliver around 150 hp. The Manx 7 comes after the SP7, that raced in the TT Zero on the Isle of Man (we reported).
autoevolution.com

Batteries made in Britain might become a thing of the past as Nissan relocates production of the new 30-kWh Leaf battery to Japan. The British Sunderland facility is thus left with assembly only.
eurekar.co.uk via insideevs.com

Most clicked link on Thursday was the announcement by BMW CEO Harald Krüger that a new all-electric model will join the ranks of the i-series soon.
handelsblatt.com (in German)

Carbon super bike: Saroléa has presented the 2015-version of its electric motorbike SP7. Now smartened up, the lighter bike (190 kg) is said to reach 62 mph in 2.8 seconds and to go up to a top speed of 168 mph as power peaks at 110 kW. It is bound to compete on the Isle of Wrights TT race.
autoblog.com, thecheckeredflag.co.uk

Hydrogen storage research: The Department of Energy has granted funding of a total of 4.6 million dollars to four projects looking at improved materials for hydrogen storage. In the long run, the research shall lead to higher ranges for FCVs.
greencarcongress.com Playful EV research: At the Hanover Trade Fair starting this coming Monday, the Esslingen University of Applied Sciences will present inductive charging technology for EVs. Also on display will be a solar-electric BobbyCar, a children’s sit-on car.
idw-online.de

Wind to hydrogen: In Nagasaki, a research project by the Japanese Environment Ministry and Toda is using surplus offshore wind energy to greenly produce hydrogen from water. It will be stored in a liquid form known as methylcyclohecane, which is made through the combination of hydrogen and toluene.
ajw.asahi.com, hydrogenfuelnews.com

Most clicked link on Thursday was the news that street legal cars actually break speed records. This converted Mustang aka Black Zombie certainly did.
transportevolved.com

As much as ten million dollars: That is how much the U.S. Department of Energy (DoE) will put into zero emission cargo transport solutions in the United States. With the investment, they are footing half of the states’ and local governments’ bills for these type of projects.
greencarcongress.com, eere-exchange.energy.gov (application docs)

New GM production facility: General Motors has kicked-off construction of a new plant for engines and transmissions in Pontiac, Michigan. The “GM Performance and Racing Center (GMPRC)” will also be the birth place of electric motors.
electriccarsreport.com, greencarcongress.com

Saroléa presents the Saroléa SP: The new machine can go from zero to 100 km/h in just 2.8 seconds. It features a battery pack with a yet unknown capacity, as well as a 13o kW motor. The electric motorcycle will soon head to the Isle of Man to battle for the trophy in this year’s TT Zero.
green.autoblog.com

Proterra sets the new record for the most miles traveled by a battery-operated bus in one day, putting some 700 miles behind it in just 24 hours. It was charged up a few times during that time period, using Proterra’s proprietary fast-charging process.
electriccarsreport.com