The Scottish Government has just awarded over £633,000 to support 45 e-bike projects across the country. The government has also awarded £210,000 to test new ways of improving accessibility across ChargePlace Scotland’s electric vehicle charging network. 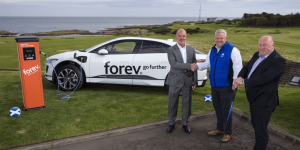 Scottish Golf, Scottland’s golf governing body, has forged a partnership with Forev charging infrastructure supplier to build a network of more than one thousand points at golf clubs, powered with clean energy.