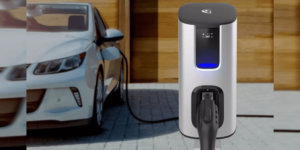 Charging infrastructure provider SemaConnect, usually in the B2B area, presents its first consumer product, the Series 4 EV Home Charger. The company has opened the order books for the Level 2 charging station and expects shipping to start in December. 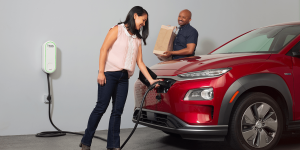 Electric Gatwick: The London airport wants to become the “UK’s leading low carbon airport” by 2025. That also means it will electrify its entire fleet over the coming 10 years.
internationalairportreview.com, airport-technology.com

More efficient: According to the National Renewable Energy Laboratory (NREL), Proterra’s all-electric buses are four times more efficient than buses running on compact natural gas. The study looked at a pilot scheme in California’s Foothill Transit, where 12 Proterra buses are in service.
chargedevs.com

EV feud: A new bill could put an end to Tesla’s direct sales model in the U.S. state of Indiana from July 1st, 2016. The EV maker blames GM to behind the measure, who responded to the allegations by saying that Tesla should not play by “special rules” when competing against “similarly capable vehicles and similar price points” – meaning the Chevy Bolt going up against the Tesla Model 3.
autoblog.com (bill); autoblog.com (GM)

Vector expands network: New Zealand’s Vector added two more rapid and one standard charger to its network in the city of Auckland. The company also said that it will install at least another 13 fast-chargers in the country over the next six months.
evfleetworld.co.uk

Charging USA: SemaConnect has installed five new charging stations at three The Wiseman Company properties in California. Four stations will be reserved for tenants and local drivers, while the fifth is open to the public. Meanwhile, DC Solar will install six portable, solar-powered EV chargers for the NASCAR weekend in Las Vegan, Nevada, next month.
pressreleaserocket.net (California), pressreleaserocket.net (Nevada)

Renault and LG Chem forged a strategic alliance to develop long-range Li-ion batteries for EVs. The partnership agreement will see the two companies combining their R&D efforts to produce a new vehicle using a high density battery to be developed by LG Chem which is said to double the current range of 93 miles.
industryweek.com, businesskorea.co.kr, koreaittimes.com

Long-lasting transducers: BYD Microelectronics (BME) announced that the multi-channel, current transducers, namely the BLX9, in BYD’s EVs have been running faultlessly for 130,000,000 miles in the last five years with each electric car running for more than 400,000 miles.
greencarcongress.com

Air-cooled, compact fuel cell system: Intelligent Energy presented its Gen4 fuel cell power unit, which has been developed together with Suzuki, at the 2014 JSAE (Society of Automotive Engineers of Japan) Annual Congress in Yokohama. The unit is designed for smaller EVs but comes with an optional range extender for application in larger vehicles.
greencarcongress.com

Google Glass to find charging stations: Charging station operator SemaConnect has developed an app to be used with Google Glass. Drivers can use Google’s wearable computer to locate the nearest charging point within a 20-mile radius. However, the app will only list ChargePro stations – currently over 300 in the U.S. and Canada.
greencarreports.com

Nissan ZEOD RC exposed: The Japanese carmaker released an explosion drawing of its hybrid race car. The CAD graphic shows most components of the ZEOD RC prototype which Nissan built to take to Garage 56 at this year’s Le Mans 24 Hours competition.
hybridcars.com

Van Hool H2 bus: RVK is the first public transport operator in Germany to use Van Hool’s A330 FC fuel-cell buses. The 150 kW fuel-cell together with a Li-ion buffer battery powers two electric motors with 85 kW each. Two of these prototypes will be put in regular service on routes in the cities of Hürth and Brühl.
newstix.de (in German)

Chargers for Connecticut: SemaConnect secured a contract to supply its EV charging stations to the town of Bethel. The new level-2 stations will help extend the state’s current network, with 50 of Connecticut’s 169 communities already offering electric vehicle charging.
automotive-business-review.com