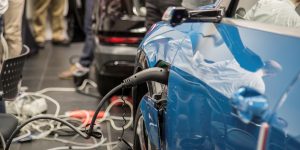 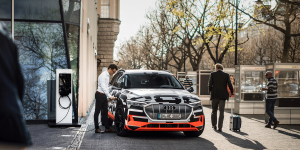 Audi has given us the details of their latest cooperation with SMA Solar Technology and the Hager Group and they are driving smart charging home. The team wants to enable future Audi e-tron drivers to charge their electric car in a cost effective and sustainable manner.

VW to enter energy market? The carmaker says talks with German SMA Solar are at the early stages as VW ponders its entry into the market for stationery energy storage systems. Already, both Daimler and Tesla rely on SMA Solar’s inverters for home storage systems.
reuters.com

Ford FCV research funded: The DoE granted 6 million dollars to Ford and the Los Alamos Laboratory to foster fuel cell research. The funds will be used to develop a lower-cost production system for fuel cells that will ultimately bring FCV prices down.
freep.com

Electric motors made in Taiwan: Memory chip maker Adata wants to start production of electric motors. Drones could fly with electric drives by the Taiwanese company by 2017 with automotive applications to follow about three years later. Adata says it is in negotiations with two carmakers.
nikkei.com

Ford on fire: In Florida, two incidents involving Ford C-Max Energi that caught fire while charging were reported. Both vehicles were plugged into wall socket and it appears the fault lies somewhere along the charge cord or with the charger itself. Ford has denied any responsibility.
wptv.com, insideevs.com