Tesla expands in China: Tesla announced that it will establish seven supercharging networks in major cities and popular travel destinations in the second half of this year. The new superchargers will be installed in the Yangtze River Delta, Beijing-Tianjin-Hebei region and at Mount Huangshan.
xinhuanet.com, china.org.cn

Oslo Airport gets H2-station: The filling station will be used by airport vehicles and is accessible to any outside person who wants to fuel their FCV. Local authorities say that “electric cars have been a success for us, but we also have to facilitate use of other zero-emission technologies.”
airport-world.com

Ohio University gets charging: A total of 10 charging stations will be installed on campus before the end of summer. Two of them will be earmarked for a car-sharing program provided by the university, while the other eight will be available for charging EVs of students and employees.
athensmessenger.com

Electric school bus: TransPower is retrofitting six Californian diesel-powered school buses with electric motors that will go into service this autumn in the Torrance Unified School District in Southern and Napa Valley District in Northern California. The buses will also be able to feed energy back into the grid.
nbcsandiego.com

University of Texas also plugs in: Telefonix has installed six of its Level 2 PowerPost chargers at the University of Texas MD Anderson Cancer Centre. The installation is also a symbol since according to the centre, improving air quality through the use of zero-emission cars could help prevent cancer.
prnewswire.com

Electric carsharing in Malaysia: Klang Valley will get its first electric carsharing scheme Cohesive Mobility Solutions (COMOS) featuring 16 Renault Zoe in May. The scheme will be expanded to other Malaysian cities and is said to include more than 1,000 EVs by 2020.
thestar.com, paultan.org

Electric busses for Bangkok? Thailand’s Minister of Transport Prajin Juntong has called for a feasibility study to see whether the current diesel and natural gas-powered buses used by the Bangkok Mass Transit Authority (BMTA) could be replaced with electric buses.
thaivisa.com

U-Turn on route to electrification: Once Governor Deal signs on the dotted line, U.S. state Georgia will scrap its 5,000 dollar incentives for the purchase of electric cars as of July 1st, and EVs and other alternative-fuelled cars will have to pay a yearly license fee of 200 dollars.
transportevolved.com

UK funds H2: The Department of Transport has earmarked 6.6 million pounds for seven new hydrogen projects across the UK. The money will be used to form a network of 12 hydrogen refueling stations, including new stations built in Brentford and Croydon and a mobile station. The fund will also support upgrades to the existing network of demonstrator stations.
autovolt-magazine.com, fleetnews.co.uk/, businesscar.co.uk 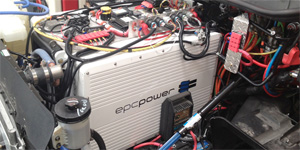 All-electric short-haul: TransPower wants to electrify the short-haul drayage market. Its ElecTruck drive system includes dual electric motors, a modular 270 kWh Li-ion battery, and a five speed transmission. Eight of these heavy weights will be put into drayage service at the Ports of LA and Long Beach, California, by the end of the year.
chargedevs.com

All for one, one for all: Toyota, Honda, Mazda, Nissan, Subaru, Mitsubishi, Suzuki and Daihatsu have announced an alliance to improve fuel economy of future combustion engines. The Research Association of Automotive Internal Combustion Engines is aiming to bring the efficiency up to 50%. Even the EV-loving Japanese seem to think that combustion engines will not be pushed off the streets anytime soon.
autoblog.com