Reading tip: According to a new report of the Miles Consultancy (TMC), PHEVs are among the highest-polluting company cars when comparing greenhouse gas emissions. The data was collected by observing real-world use of corporate fleets.
themilesconsultancy.com

Video tip: Bollinger Motors has published three video clips showing its new electric SUV Bollinger B1 through a test run as well as in a technical animation.
insideevs.com 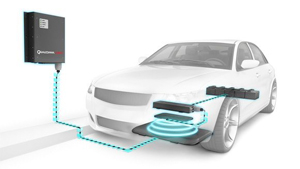 Anodes from algae: Researchers at the University of California, Riverside, have developed a method to create silicon-based anodes for lithium-ion batteries from the fossilised remains of algae called diatoms. This may lead to producing ultra-high capacity batteries for electric vehicles.
phys.org, ucrtoday.ucr.edu

Hydrogen funding: The DOE will support the launch of the HydroGEN Consortium with 10m dollars. The consortium is tasked with combining the capabilities of national laboratories to speed up commercially viable hydrogen production from renewable energy sources.
environmental-expert.com 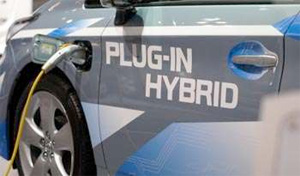 Hybrid deal: Efficient Drivetrains (EDI) and Ford entered into a license agreement for hybrid vehicle patents. Some of the patents are owned by the University of California-Davis and include the work of Dr. Andrew A. Frank, who is also a founder of EDI.
greencarcongress.com, businesswire.com

H2 production: A team from Sandia National Lab boosts hydrogen production activity four-fold by replacing platin in catalysts with molybdenum disulfide, Molly in short. The process decreases the cost of hydrogen evolution reaction (HER) as Molly is a low-cost catalyst in solar-driven water splitting.
greencarcongress.com, sciencedaily.com

Most clicked link on Tuesday was the show race in Japan serving Tesla to present a rather rough side of the Model S – slide on the wild side.
youtube.com

Electric, autonomous, and Italian: Italdesign Giugiaro once more unveils an electric concept vehicle in Geneva. The Gea can drive autonomously and features four electric motors which account for 570 kW. The huge luxury limousine is most versatile as it can be transformed into a gym, office, or lounge.
autoexpress.co.uk, caranddriver.com, youtube.com (video)

Electric, autonomous, and Italian, too: ED Design’s concept Torq does not need a driver and has no windows either, not even a windshield. The sports car weighs only 1,000 kilos and has four electric in-wheel motors delivering 1,800 Nm of torque – hence the name. Power comes from a 88-kWh battery.
cnet.com, caranddriver.com, youtube.com (video)

Polysulfide shuttle prevention: Researchers from the University of California, Riverside, have come up with a solution to prevent the so-called polysulfide shuttle in Li-S batteries. They used SiO2-coated sulfur particles for the cathode material and added mildly reduced graphene oxide.
greencarcongress.com, ucrtoday.ucr.edu

EV app by Ford: The carmaker showed the My Ford Mobile app at the Mobile World Congress in Barcelona. It will first be utilised in the Focus Electric and Ford’s hybrid range as it i.e. shows the remaining range and state-of-charge.
dailymail.co.uk, digitalspy.co.uk

Most clicked link on Wednesday was the Audi R8 e-tron unveiled at the Geneva Motor Show.
springerprofessional.de (in German) 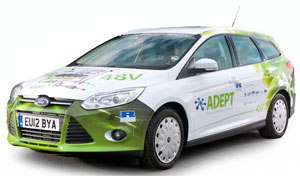