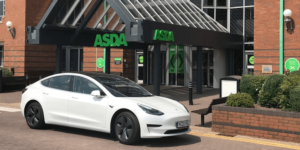 The British supermarket chain Asda has announced that it will convert its fleet of over 600 vehicles completely to electric cars by June 2025. The company is thus a few years ahead of the British government’s target of only allowing new zero-emission cars from 2030.

Double pay-off: On Zenith’s salary sacrifice car schemes, drivers can get the BMW i3 for 310 pounds (517 dollars) a month. Apart from considerate savings on fuel, the company promotes its offer with low cost of ownership, claiming the i3 can cost 189 pound (315 dollars) per month less than a BMW 118d Sport over its life.
fleetnews.co.uk

No charge to charge: Nissan’s promotion to offer free charging to Texan Leaf buyers seems to pay off. In 2013, Leaf sales increased by 500% in the area. The ‘No Charge To Charge’ offer is valid for 12 months and allows unlimited free charging at eVgo stations.
cleantechnica.com

To be or not to be eligible for a white sticker remains a question for the BMW i3 REx. The California Air Resources Board (CARB) lists the i3 as qualified to wear a White Clean Air Vehicle Sticker but the range extended version is still missing. BMW said, the i3 REx qualifies for a green sticker, these are however limited and scarce with 29,000 of 40,000 for this year already assigned.
transportevolved.com