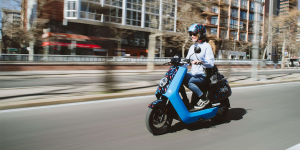 Renault starts charging platform: The French manufacturer launched the online platform Elbnb in Sweden, making it possible for EV drivers to charge their car at someone else’s home anywhere in the country. In other words, it’s Airbnb for electricity. Pricing is said to be agreed upon directly between users and more than 1,200 private charge points have already been registered.
reset.org, elbnb.se

AddEnergie launches FLO: It will be Canada’s biggest charging network and will connect nearly 2.000 chargers in Québec, Ontario, and other provinces. AddEnergie will also install another 8,000 stations over the next five years and offers an app to locate chargers and pay for the session.
ctvnews.ca, montrealgazette.com

New Flyer launches mega-deal: The manufacturer has received an order for 90 hybrid buses from the Southeastern Pennsylvania Transportation Authority (SEPTA). The deal also includes an option for another 460 hybrid buses over the next five years.
newswire.ca

Zhongshan electrifies: The Chinese city wants to erect more than 10,000 charging points by 2020 and therefore get some 9,500 electric and hybrid vehicles on the road. It says it will invest 1.1bn yuan, about 167m dollars to get the project off the ground.
autonews.gasgoo.com

Electric exploration: Cornwall-based Eden Project that allows visitors to explore the world’s largest indoor rainforest, has added another 18 electric cars from Renault to its fleet. The 13 Kangoo Z.E. are destined for the crew for maintenance, security, catering, etc.
evfleetworld.co.uk