Joint EV development: Renault and Nissan are strengthening their cooperation for the sake of synergies. The convergence covers four areas, one of which is Engineering that includes the development of electric drivetrains.
greencarcongress.com, transportevolved.com 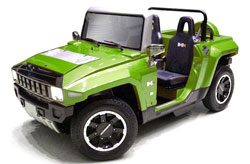 Electric Hummer: GM’s mega car is back but in a much smaller version and fully electric. The ‘MEV Hummer HX’ is distributed by Swiss MEV Cars with a licence by GM. The electric mini Hummer is available with either lead-acid or li-ion batteries. Currently, production is in China but MEV Cars plans to relocate to Europe soon and is also looking for a German distributor.
automobilwoche.de (in German)

Tuning Tesla: T-Sportline calls itself the AMG of Tesla. Its tuned version of the Model S costs 205,820 dollars, that is 80,000 dollars on top, if all options like gilded steel rims, a carbon-fiber body kit and interior upgrades are added.
carbuzz.com, youtube.com (video)

Paris is fuming: Due to heavy smog that has clouded the French capital for days, the city banned half of all cars and motorbikes on Monday. Only hybrids and electric vehicles were exempt. Furthermore, the use of public transport, car and bike sharing schemes was free of charge.
greencarcongress.com, businessgreen.com, thegreencarwebsite.co.uk

Nissan and Renault are on track to hit their sales target of 1.5 million electric vehicles by 2020 or maybe even sooner, according to company officials. Renault-Nissan CEO Carlos Ghosn had initially been more ambitious when predicting this number to be reached by 2016 but has since added four more years. Only time will tell…
greencarreports.com