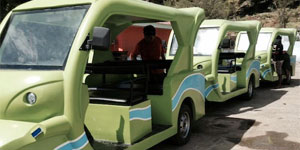 Batteries for trikes: EnerDel secured a long-term agreement with GerWeiss Motors to supply 3 kWh battery systems for motorised three-wheelers to be used on the Philippine island of Boracay. GerWeiss aims to convert up to 500 of these vehicles to electric power by 2016.
green.autoblog.com

World’s largest H2 power plant: A 1.11 megawatt fuel-cell system has been installed at Toyota Motor Sales’ headquarters near Los Angeles. The stationary power plant will provide enough energy to provide the campus with half the energy needed during peak times. The hydrogen is produced using a natural gas reformation technique.
electriccarsreport.com

A 10-minute charge will be all Stockholm’s new ferry needs to travel one hour at 9 knots. The Movitz is currently undergoing a retrofit to electric power, which is said to cut 130 tons of CO2 and 1.5 tons of NOx emissions. It will be using a 180 kWh NiMH battery to power two 125 kilowatt motors.
wired.com

Toyota hybrid victorious: At the Six Hours of Spa-Francorchamps, the Toyota hybrid race car TS040 prooved successful again and won the race. Next up is Le Mans!
puregreencars.com