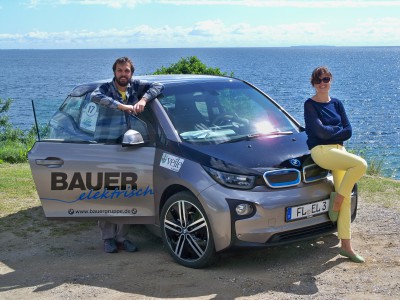 EV rallies are always fun! A constant test of a steady hand, acceleration and driving comfort, there is no better way to experience all the benefits an electric car has to offer. That is why we sent our journalists Carla Westerheide and Marc Kudling to Northern Germany to compete in the North European E-Mobile Rally. They were given the task of tackling another challenge, every EV rally driver has experienced before – charging up quickly and getting back on the road. As a sort of ‘ace up their sleeve,’ the two took along a brand new ChargeBox. Here is what they have to say about fast-charging their BMW i3 with a mobile CSS throughout Northern Germany and Southern Denmark, which has almost no permanent DC charging infrastructure.

Some 30 teams arrived alongside us in Flensburg in northern Germany, all to take part in the “4th Northern European E-Mobile Rally.” All eyes were on the Rimac Concept One, though it would not be part of the competition. There are just no real opponents to its 1088 HP. 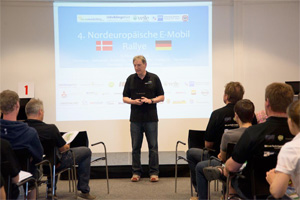 Other than that, the square filled with Nissan Leafs, Mitsubishi i-MiEVs, Tesla Model S and Roadsters, a few VW E-Ups and even the one or other homemade conversion. Our ride was sponsored by the local BMW dealership of the Bauergruppe. Not an official BMW i-Agent, it had decided to purchase an i3 on its own initiative. The Swiss company Designwerk also chose to support us, giving us their mobile fast-charging solution to take with us on the road. The so-called ChargeBox is a mobile CCS charger that would allow us to ‘fill up’ our BMW i3 in no time. What better place than a rally to put the device to the test?

To put it simple, the ChargeBox just looks like a suitcase. But despite its handy appearance, putting the 20.5 kilogram device into place is sometimes easier said than done. A second handle or wheels would definitely facilitate that task. 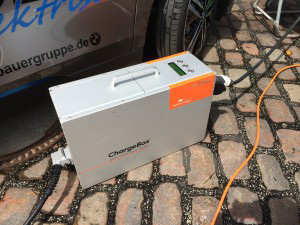 The use of the mobile three-phase box, on the other hand, proved simple. First, one side (a Type 2 inlet) has to be connected to the grid. This can be done using a CEE cable (the red industry outlet with 32 A/ 400 V, Mode 1) or a Type 2 cable at a public charging station or Wallbox. In case of the latter, the available charging capacity will be determined automatically (i.e. 11 kW). As soon as the ChargeBox is hooked up to the grid, it begins to ‘initialize,’ which takes about 60 seconds. Only then can the vehicle be hooked up. The Combo cable and ChargeBox are connected via an industrial connector, which according to the manufacturer, can be traded against a CHAdeMO connector. In other words, the ChargeBox is compatible with both systems and therefore responds to current discussion about standards for public DC charging infrastructure in the best possible way. 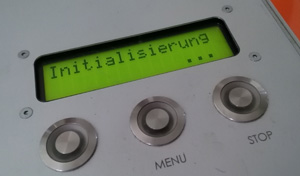 To cut a long story short – the ChargeBox kept what it promised. What is even more remarkable is that our demonstration seems to be the first unit to have rolled of the production line. Its serial number is actually 1. During the entire rally, it charged our and our competitors’ vehicles with CCS connectors without a problem.

That means three BMW i3s and two VW E-Ups – and that more than once a day. The ChargeBox proves to be a great solution for fleets or events, where a series of vehicles need to be charged in a short amount of time and where there is no permanently installed DC charging infrastructure. It could also be of interest for repair and body shops. Another advantage during the rally was that the vehicles did not have to be moved after being charged, but that the ChargeBox itself could ‘wander’ from one car to the next. It also helped that the BMW i3’s combo plug was not locked and could be removed at the end of charging, without having to unlock the vehicle. The price for one ChargeBox is – and you may want to sit down for this – 15,000 Euros net. That is including one option (Combo or CHAdeMO). The multi-system version goes for 16,500 Euros – a price tag that will most likely not have the normal rally-driver convinced. But the cost will probably fall, once the production numbers increase. And when you consider that inside this power suitcase sits a three-phase Brusa charger (known from the Smart Electric Drive and 18-tons E-Force truck), and you put the costs of fixed DC installations into perspective, the price seems almost justified. 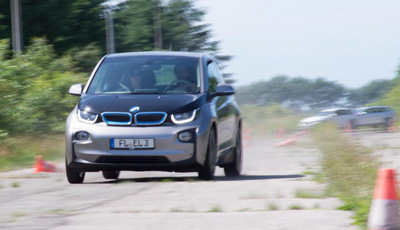 Talking about price or in this case, prize – team electrive did unfortunately not take home the trophy of the Northern European Rally, which is judged according to classic-car rally rules. In the so-called ‘speed camera test,’ however, where one had to accelerate as fast as possible on just 40 metres, the team took first place in the category ‘sports cars.’ Thanks to its 125 kW driving power, the BMW i3 was able to reach an impressive 56 kph. Conclusion: we can charge fast and drive fast – the rest we will just have to keep practising.

A report by Carla Westerheide and Marc Kudling