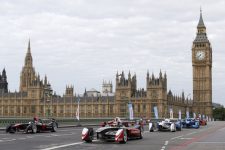 The Formula E is ready at the stating gates. electrive’s Nora Manthey was at the kick-off event in London on Monday evening. She says, organisers of the electric racing series have one clear message – “We are the future!” That even gets Germany’s automotive industry to prick up its ears. BMW is the latest to join the series – partly at least.

And the Formula E sees itself not only as the future of racing but of the whole automotive industry. At least if you believe the words of Alejandro Agag, CEO and chief promoter of the Formula E. 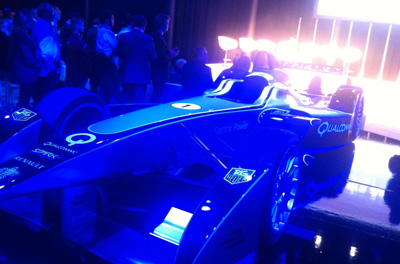 He wants to create a hub for new technology and bring electric vehicles to masses. A big promises that needs big partners. Some are already on board, like Formula 1 expert Williams, represented by founder Sir Frank Williams at the event, and McLaren. The two British companies are responsible for motor (McLaren) and battery (Williams) of the exhibited racer, which only took about one year to build.

Support of the British government was highlighted by the presence of Michael Fallon, Minister of Business and Enterprise. In his speech, he conjured the (electric) revival of the national automotive industry. And events such as the Formula E in London or its newly build headquarters in Donnington Park not only show the country’s commitment to vehicles with alternative powertrains, but also its commitment to creating new jobs. According to Fallon, some 200 people are already employed in Donnington.

Excitement rose with the screening of a promotional video, showing Formula E cars racing across Westminster Bridge against the backdrop of Big Ben and Parliament. The film received so much applause that it was shown not only once, but twice!

Back to business, it was officially announced that London will host the final race of the season. On June 27th, 2015 – so pretty much exactly one year from now – the ‘London ePrix’ will take drivers through, for example, Battersea Park. A fitting location, as Battersea Power Station is a decommissioned coal-fired power plant.

To get a taste of what is to come next year, the public is invited to witness the pre-season testing in Donnington on Thursday. Anyone can come and watch, after registering on the official website.

Also, the ‘fan boost’ will shortly be available on the Formula E website, in time for the first race in Beijing, China. The interactive tool allows fans to give their favourite racecar driver a little push with the click of a button. The most popular contestant will get an extra boost (we reported). He or she, one has to say, since Formula E now has two female drivers. Joining Katherine Legge (Team Amlin-Aguri), Michela Cerruti has been chosen to race for Team Trulli GP. She was introduced by team chief Jarno Trulli on Monday night, a former Formula 1 racer himself, who also talked about the excellence of the electric Spark Renault SRT_01E, to which he had been asked to give feedback during development. Let’s just say, Formula E is as good in all things PR and marketing, as they are in racing… 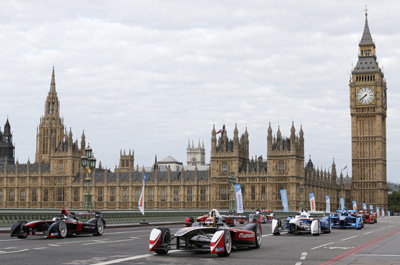 Renault had signed up early on and took control of the integration of technology and, most importantly, safety of the official Formula E car. “An electricity accident is the one thing we cannot have,” Agag emphasised, “because then everybody will say: you see?!” He expressed his full trust in the French carmaker.

Renault will take its commitment even one step further, using the launch as an opportunity to announce that it has teamed up with Dams to jointly race as team e.dams Renault with drivers Nicolas Prost and Sébastien Buemi. The former is the son of Alain Prost, who is the co-founder of the newly formed team. However, Renault is not the only manufacturer supporting the electric racing series. According to Agag, a partnership with BMW is ready to be finalised.

Guests and journalists got a first taste of the Bavarian involvement, as both the BMW i3 and i8 were exhibited at the event. While the hybrid sports car fascinated mainly the male attendants, who took the chance to get their photograph taken with the wing doors wide open, the i3 caught the attention of two little girls. When told that it is fully electric, they exclaimed excitedly: “Oh, that’s better if it’s electric because the other cars are just polluting the whole world!” Conclusion: Kids today don’t live and breathe petrol yet. So the future might indeed just be fully-electric.