Leading by example: The British government is making use of its own 5-million pound ‘ultra low emission vehicle (ULEV) readiness’ programme for the electrification of government fleets. From autumn this year, about 300 electric cars and plug-in hybrids, including vans, as well as infrastructure will be acquired.
gov.uk, businessgreen.com, smmt.co.uk

Charge & Fly: San Francisco International Airport has asked Greenlots to install four 480-volt quick charging stations. These will be the first DC fast chargers using the Open Charge Point Protocol (OCPP) at the airport and are funded by the California Energy Commission.
chargedevs.com 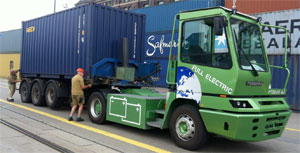 Fully electric supply chain: In Berlin, the biggest electric truck approved for road use to date has made its maiden voyage. It is part of the “Schaufenster” project KV-E-Chain that strives to transport goods electrically over long distances. Containers are brought by train from Western Germany to Berlin’s Westhafen port before then being distributed further by EVs like the electric truck.
morgenpost.de (in German), emo-berlin.de (KV-E-Chain project page)

DIY electric highway: Chinese When Zong built his own network of Tesla charging stations from Beijing to Guangzhou for 730,000 yuan (117,700 dollars). The Model S owner was tired of waiting for the Californians to cover the 3,570-mile stretch but had to resort to slow chargers on private grounds.
mashable.com, carbuzz.com