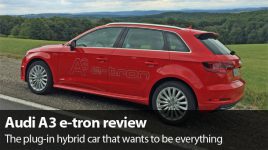 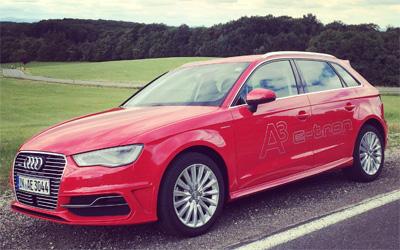 It is finally here – Audi’s first series produced electric vehicle. For quite some time, the carmaker from Ingolstadt did not live up to its own principle. Technical advances in EV technology were being made by Tesla and BMW. But that is all supposed to change with the A3 e-tron, with which Audi attempts to square the circle. The car is supposed to be perfect for everyday life, while featuring a complex drivetrain system. Peter Schwierz, founder of electrive.com, went to Vienna to test drive the A3 e-tron – and to debate a question of principle.

For four weeks, Audi flew hundreds of local and international journalists to Vienna to present their first plug-in hybrid. Silently they drove through the streets of the Austrian capital and dashed up nearby hills. Die-hard enthusiasts were hard to find, however. It was more an attempt of approaching a vehicle that wants to be everything – good for everyday life but exciting, electric but conventional enough, modern but not too different. Sometimes it seems as though the A3 e-tron cannot make up its mind up. Is it an electric vehicle for the city, a vehicle to go the distance on the Autobahn, or a wannabe sports car for that business appointment? It can do everything – that goes without question. That is why Audi’s slogan “The best of both worlds” fits this plug-in hybrid well. But you have to ask yourself: is it maybe too much? 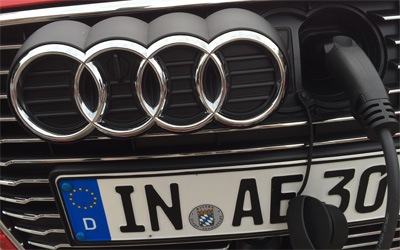 Audi promises 50 kilometres of electrical range. We did not make that, but 30 to 40 kilometres seems realistic for everyday usage. At least if you do not feel the need to show off your technological superiority after every red light (the electrical acceleration is astounding)! So that fits. If you drive longer distances (we did about 110 km), you have a choice – up and down hills in sport mode, ‘Hybrid Auto’ on country road and letting the car decide, the ‘Hybrid Hold’ to preserve electrical range for the last few kilometres, or select the ‘Hybrid Charge’ setting and using petrol to charge the battery. In between, you can make use the boost function to overtake other vehicles and let the small 1.4-litre TFSI roar. That is all possible – and considering this is Audi’s first plug-in, it all works pretty smoothly. But at times it still feels like ordering a sandwich at a Subway restaurant: wheat or white bread; tomato or cucumber; the spicy sauce or one of the other eight; would you like extra cheese…? At times you just want to say “just pick whatever fits best!” It is no different with the A3 e-tron. You want to shout “just drive in whatever way is best.” Or maybe in sport mode after all? That is the problem. In the Audi A3 e-tron, the driver is constantly spoiled for choice. It is all made possible due to a six-speed S-tronic dual-clutch gearbox and a dual-mass flywheel that drive the front wheels. Young technic-loving buyers might get excited about that. But your real-world driver will probably stay in autopilot. By the way, the same drivetrain is also used in the Golf GTE and was therefore developed mainly at Volkswagen in Wolfsburg.

THE QUESTION OF PRINCIPLE

Where Audi really makes a different compared to its electric opponents is if you step off the accelerator. What would the EV connoisseur expect? Exactly! Recuperation. Only that does not happen in this case. Instead, the engine is switched off and the car begins to sail. And the car does not stop. It keeps going faster and faster downhill. If you want to slow down and recuperate, you just have to step on the breaks ever so slightly. “Electric braking” is what Audi calls it. What sounds simple at first takes even the experienced electric car driver some getting used to. It gets better once you are in sport mode: Here you can – i.e. on mountainous roads – accelerate and recuperate to a maximum ahead of the next bend. That is the way it is supposed to be, anyone who has ever driven the BMW i3 might say. But is that really reason enough to waste petrol by staying in sport mode? Once again, the A3 e-tron lets its driver decide. And then there is the multi-level gearshift when acceleration using the electric motor. An experienced EV driver might instead expect continuous acceleration. That is something you really need to want to have. And the transitions of the hybrid system are not smooth as butter either – after a mini break, you can hear the TSFI kick in. That is where Audi remains Audi – it still has plenty of petrol running through its veins.

What remains of the Audi A3 e-tron is a clear feeling that it is neither fish nor fowl. It drives electric, but does not recuperate; it wants to serve an everyday need, but constantly presents the driver with a choice; it wants to be innovative but too different, so Audi drivers can still identify with it. “Discover the possibilities” would maybe proof a better motto for the plug-in hybrid. It is possible that for some, this is the perfect company car. The daily commute can be driven in electric-mode, and you can make the out-of-office appointment using the petrol engine. Family vacations are not an issue either. With a price tag of 37,900 euros, it might definitely be more expensive than a regular A3. Compared to the BWM i3 Rex, Opel Ampera and Mitsubishi Outlander, however, the price seems fitting. Maybe the A3 e-tron is exactly what the carmaker needs to keep open-minded drivers from turning to BMW or Tesla. And maybe the new plug-in hybrid is exactly the “yes, but” answer to the question of the future of electric mobility. One thing is sure – it is a good and important step that a production Audi now comes with a purely electric mode. Even if the car wishes it could be a sailboat.

Text and photos by Peter Schwierz