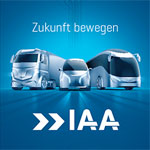 2,064 exhibitors from 45 countries will be at this week’s IAA Commercial Vehicles 2014. A total of 322 world premieres will be on display at the world’s most important trade fair for mobility, transport and logistics. While drive electrification may not yet have fully caught on in the price-sensitive commercial-vehicle sector, the importance of the topic is growing. As such, here are 10 EV innovations you should take a look at in Hanover – we also tell you where you can find them. 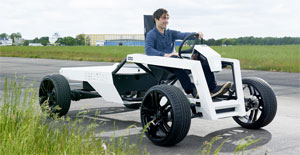 Headed up by Fraunhofer IWU, the German government-funded POLY-LAB.NET project developed an electric concept vehicle for the agricultural sector. The KULAN weighs in at around 300 kg (660 lbs) but can haul up to 1000 kg (2204 lbs). This is made possible by really strong, lightweight materials like polyurethane. The KULAN has two electrically driven wheel hub motors and a patented “smart” battery management system. When fully charged, the battery has a reported life of up to 6 hours or a range of up to 300km (186 miles) depending on the load, terrain, and temperature.
Where? Hall 13, Booth C22 (Automotive Cluster East Germany)

The Polish manufacturer Solaris Bus & Coach will be unveiling its new Urbino model at IAA. On display at the motor show will be the 12 m (39 ft) standard bus as well as the 18 m (59 ft) bendy bus – both of which have also been designed to use hybrid and electric drives. The event also marks the sales launch of the new bus, with deliveries slated for the start of 2015. The manufacturer says the new Solaris Urbino has been completely redesigned. Apparently, it is lighter and more robust than its predecessor although it retains all the components which have proven themselves over the past few years.
Where? Hall 11, Booth E27 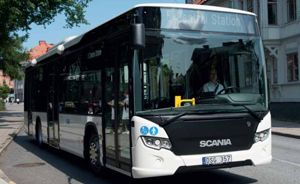 At IAA, Scania will be showing its own hybrid system for buses which the company will present in Hanover in the form of the Scania Citywide LE Hybrid. The bus seats 33 and is 12 m (39 ft) long. We’re sad to say that the Swedish manufacturer hasn’t provided any technical details on the hybrid drive yet. Scania is really emphasizing the lower costs for customers, with every drop of fuel saved coming in particularly handy in this regard.
Where? Hall 17, Booth B06 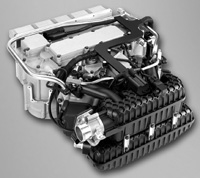 The Green Rex project is funded by the German Federal Ministry for Economic Affairs and Energy. As part of this, and in close collaboration with Fraunhofer ICT, KSPG and FEV are developing a range extender which operates with natural-gas. They are currently testing its suitability for everyday use. Initially powered by gasoline, the first step involves integrating it into a StreetScooter Work van which it will show at IAA Commercial Vehicles. Following that, the range extender will be revised and optimized for operation using processed biogas. The revised range extender will then undergo bench testing before being integrated into another StreetScooter van. KSPG will also be showcasing an energy efficient heating and cooling module for electric commercial vehicles based on a heat pump.
Where? Hall 16, Booth C14 (KSPG) 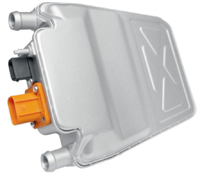 Webasto has developed a high-voltage heater for hybrid and electric vehicles. Its design means it can be implemented without any loss of performance with a battery voltage range of between 250 and 450 V. The heat output is fully adjustable from 0.2 to 5.0 kW, while the device itself weighs around 2 kg (4.4 lbs). Thanks to its compact design, the manufacturer says it offers maximum installation flexibility. All the connectors are mounted on the front, making rapid plug-and-play installation possible. A key consideration for Webasto during development of the heater was that it should contain no lead and only use easily available raw materials. The newly developed heating layer therefore contains no rare earth elements.
Where? Hall 12, Booth B22 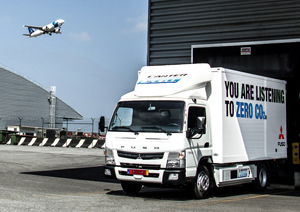 Compared to the first prototype which celebrated its world première at IAA 2010, Daimler says the Fuso Canter E-Cell has been extensively improved. The fully electric truck is based on the conventional Canter’s chassis and has a permissible gross vehicle weight of 6 tonnes (6.6 tons) and a chassis payload of around 3 tonnes (3.3 tons). The 110 kW electric motor produces a maximum torque of 650 Nm with the power transferred to the rear axle via a single-gear transmission. According to the manufacturer, the Fuso Canter E-Cell has a range of over 100 km (62 miles). Eight prototypes of the e-truck are currently being trialled in Portugal. The Fuso Canter Eco Hybrid, which has been on sale in Europe since the end of 2012, will also be shown at IAA.
Where? Hall 14/15, Booth C02

Originally conceived for electric buses, Opbrid has transferred its Bůsbaar overhead, pantograph-based rapid-charging solution to the electric truck. At IAA Commercial Vehicles 2014, the Spanish manufacturer will present a modified system (Trůkbaar) which can supply up to 650 kW of power to recharge batteries. According to the manufacturer, Bůsbaar and Trůkbaar are fully compatible so cities can also utilize the investment made in rapid-charging stations for trucks and other load-carrying vehicles such as for garbage collection and street cleaning.
Where? Hall 13, Booth F12 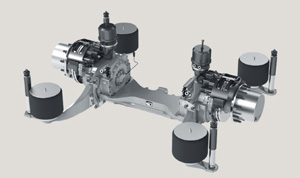 Automotive supplier ZF has a lot to show at IAA Commercial Vehicles, including the AVE 130 low-floor electric portal axle for city buses (shown). At its heart are two water-cooled electric motors near the wheels. They each produce a maximum output of 120 kW and can be fed from different power sources. Besides plug-in battery operation with or without a range extender, energy can be supplied by fuel cells or overhead cables with the appropriate infrastructure. When braking, they switch to generator mode and gain back valuable braking energy. In addition, ZF will be presenting an “Innovation Truck” with a hybrid drive system. Apparently, the truck parks on battery power alone and can also be controlled remotely via a tablet.
Where? Hall 17, Booth B17 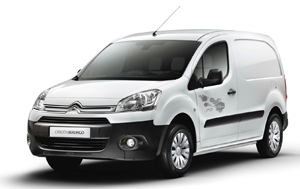 The French auto manufacturer will present a really special model at IAA: The electric version of the Citroën Berlingo with a complete chimney-sweep solution from Sortimo International. You may be wondering why, but there’s a good reason for it: According to the manufacturer, 7,000 Citroën vans have been sold so far as commercial chimney-sweep vehicles. The Citroën Berlingo Electric’s motor has an output of 49 kW and its 22.5 kWh battery capacity should be good for a range of around 170 km (106 miles). The net price for the vanilla version is €20,700 (around US$ 26,550). On top of that comes the cost of the battery, which can be purchased for a one-off payment of €5,300 (around US$ 6,800) or rented for a monthly fee starting at €89.34 (around US$115).
Where? Hall 13, Booth E52 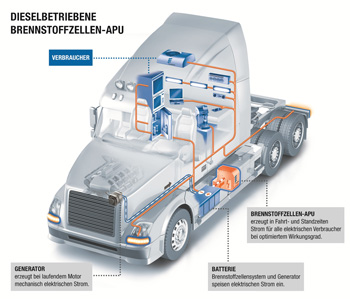 Eberspächer has set its sights on doing nothing less than revolutionizing the power supply in trucks with its fuel-cell APU (Auxiliary Power Unit) – and it’ll be on show at IAA Commercial Vehicles. It converts diesel into electricity to supply the required power to all on-board consumer components. The key advantages of this engine-independent system is that it takes the load off the generator for electricity generation. In future generations of trucks, components driven mechanically today could thus be powered electrically at considerably less expense. The maximum output is 3 kW and the possible efficiency is up to 40%. According to the manufacturer, this means the system operates so effectively that it can be used as a supplier of energy not only during stationary periods but also on a permanent basis. Eberspächer intends to carry out extensive practical testing before this year is over, and plans to launch the fuel-cell APU initially on the US market at the end of 2017.
Where? Hall 16, Booth B02