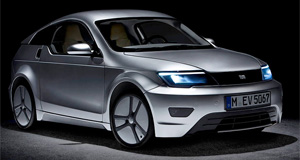 Presenting the Visio.M: The Technical University Munich took off the wraps of its lightweight prototype yesterday. Designed as a second car, the EV seats two passengers. Featuring an electric engine producing 15 kW, top speed is set at 120 kph, while the 13.5 kWh battery allows the Visio.M to go up to 160 kilometres on one charge. The vehicle is said to cost about the same as petrol-driven car in the same category. But according to researchers, the way to serial productions is still a long one.
sueddeutsche.de, auto-motor-und-sport.de, tum.de, visiom-automobile.de (all Links in German)

Hydrogen vehicles from Wales: Start-up Riversimple has developed a fuel cell two-seater with a body made from composite materials. The vehicle is said to be able to go up to 300 miles on one fill. First tests are planned for late next year.
electronicsweekly.com

Roads without drivers: Welsh engineer Will Jones wants to introduce electrified roads for autonomously driving EVs in the U.S., inspired by racing track for toy cars. Because the track is electrified, electric vehicles could have unlimited range.
walesonline.co.uk

Most clicked link on Monday was the news that Local Motors is looking to begin selling the 3D printed Strati EV starting next year.
autonews.gasgoo.com