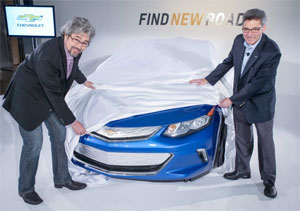 Even easier charging: The next-generation Volt, which will debut at the 2015 Detroit Auto Show, is said to come with facilitated charging. Volt-owners will be able to pre-set a preferred “home” charging location and charging levels. Charge status indicators get a redesign, too, while the portable 120V cord is to be extended.
electriccarsreport.com, greencarreports.com, transportevolved.com

Efficiency comparison: The EPA just named the BMW i3 the most efficient production car sold in the United States. Its 125 MPGe rating even sets its apart from the 2013 Tesla Model S 85 (89 MPGe) by an impressive 39 percent.
greencarreports.com

8Fun re-brands as Bafang: The hub motor manufacturer has taken back its original name under which it is about to open a European service centre in the German Eiffel region. Furthermore, Bafang added the mid-motor ‘Max Drive’ to its range. With a max. torque of 80Nm, it can power s-pedelecs and will go into production by March 2015.
bike-eu.com

Making the e-Golf: Karl Brauer went to Wolfsburg and Braunschweig to take a close look at Volkswagen’s production of the electric Golf. About 70 e-Golfs are produced daily on the same assembly line as the conventional model, making it easy to shift according to demand.
forbes.com

Driving the future: At the LA Auto Show, journalists finally got a chance to take a spin in Toyota’s Mirai. While Consumer Reports is not exactly excited but liked it “fairly well,” Eric Pfanner thinks the FCV clearly is no Prius but a car that is “fun to drive.” The Australian Motoring is not sold on the design but finds the drive rather “inspiring.”
consumerreports.org, blogs.wsj.com, motoring.com.au