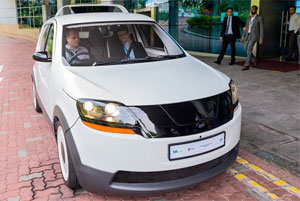 German-Sino electric cab: TUM Create, the joint venture between the Technical Universities of Munich and Nanyang, presents the prototype of an electric taxi designed to serve in mega cities with tropical climate. EVA is said to have a range of 200 kilometres and to be charged inductively in 25 minutes. The electric cab is about 150 kg lighter than its conventional counterparts.
eandt.theiet.org, taxi-news.co.uk, ntu.edu.sg

Honda’s Hyperloop alternative: At the SAE congress, Honda presented its version of Elon Musk’s high-speed transport system. Connected and widely autonomous vehicles could travel with up to 300 kph in a dedicated tube running parallel to the Interstate 5 between LA and Frisco.
zdnet.com, gazettereview.com

LG Chem, too, looks to Tesla as an example (or is it the other way around?!) and presented its AC battery for private and commercial use. The stationery energy storage is built together with Eguana Technologies and destined for North America.
cleantechnica.com