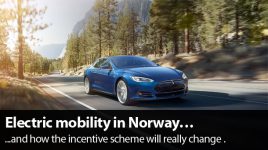 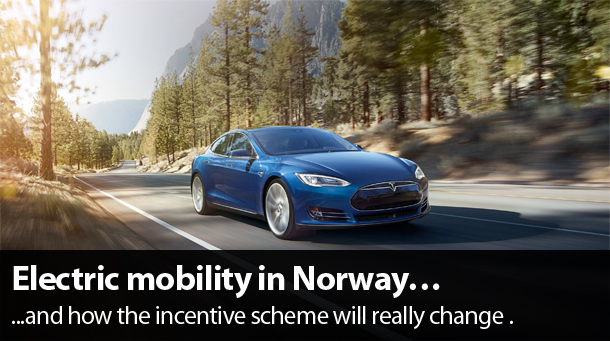 In Germany, there have been a lot of erroneous articles about Norway’s subsidy programme for electric cars. Media reports simply claim that incentives to buy will be scrapped. But what is really going on in the Scandinavian EV heaven? For our German edition electrive.net we took a closer look, speaking i.e. to the Institute of Transport of Economics: and a complete stop of government aid is out of the question.

The truth is that the government’s massive assistance programme will stay in place. The 25 percent of value added tax will continue to be waived until at least 2017, as will the registration tax (which will not be limited prior to 2020). The latter tax is hardly conceivable in Germany. In Norway, the levy is calculated by considering performance, CO2 and nitric oxide emissions, as well as the curb weight. Registering a heavy and high-performance vehicle could therefore easily cost tens of thousands of euros.

That explains why the Tesla Model S is such a success there. It is cheap compared to other vehicles in its class such as the Audi A7 TDI Quattro. In fact, it costs only about half. And due to speed limits of 100 kph on motorways and 80 or 90 kph on roads, the actual range of battery electric vehicles is generally very close to the maximum range. However, we have learned that many Norwegians feel this kind of government aid is anything but fair. After all, luxury should be taxed.

WHEN THERE IS A SURCHARGE FOR COMBUSTION ENGINES

Let’s not look at the exception, but the rule: A regular Volkswagen Golf, the Norwegians favourite, with the smallest available combustion engine with 63 kW (85 hp) will cost more than the electric variant, which even has higher end features. From a German viewpoint, that could be considered a twisted world. But it is worth a second thought – what if the versatility and short refuelling time of a petrol-powered car would be surcharged, making the EV the cheaper alternative? 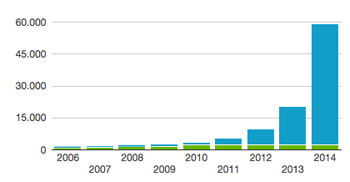 Aside from tax incentives, it is also helpful that Norwegians have long used charging cables. There are outlets in many of the country’s supermarket parking lots, used to pre-heat the engine coolant and inside of petrol-powered vehicles. It cuts the cold start time, deadly for components, and de-iced windows increase visibility and safety (now also in the case of EVs).

It is obvious: Norway and Germany differ considerably in terms of framework conditions. The Scandinavian country, which became rich through oil extraction, is not a member of the EU but part of Schengen area. It can do without tax revenues and afford generous incentives. And due to the use of 100 percent of renewable hydropower, residents recognize the environmental benefits of electric mobility. And even though Norway is larger in size than Germany, only about five million people live there.

NOT TRANSFERABLE, BUT IMPORTANT TO KEEP AN EYE ON

The funding scheme is therefore not a good role model, since it is not really transferable. Still, the country could serve as a testing lab. We should watch closely what effect incentives will have on sales, when battery-powered cars are cheaper than those with a petrol engines. And how will the market evolve, when the e-Golf will feature a 40 kWh instead of a 24 kWh battery pack?

German buyers will probably not experience anything like the Norwegian pricing structure, unless battery prices and therefore the price of cars will drop significantly. Despite all sorts of rumours, a car scrapping bonus is hardly in the cards here. Still, electric mobility will remain a hot topic.

Below we present the most important changes the Norwegian incentive programme proposed in May – a final decision has not been made.

EVs are exempt from the one-time registration tax (in place since 1996), which is based on performance, CO2 and nitric oxide emission, and curb weight. It the case of a VW Golf, that could amount to 6,000 to 9,000 euros.

>>Idea for the future
The measure will be continued until at least 2020. Limitations thereafter will depend on how much headway Norway has made in terms of reducing CO2 emissions. A “phasing in” in terms of curb weight and performance could exclude particularly heavy or high-performing vehicles from the incentive scheme.

>>Idea for the future
The measure will stay in place until at least 2017. After that, buyers could be asked to pay value added tax in full, which will be balanced out through a one-time grant. That grant will in turn be reduced gradually.

Motor vehicle tax; current
The annual tax payment has been reduced (since 2004). Electric and fuel cell cars pay only 52 euros per year, while petrol-powered vehicles cost between 360 and 420 euros annually.

>> Idea for the future
Starting in 2018, EV owners will pay half of what owners of petrol- or diesel-powered cars are asked to pay. The tariffs will be aligned starting in 2020.

Other privileges
EVs are allowed to use bus lanes during rush-hour. The threat of congestion has, however, been recognized.

>>Idea for the future
Communities will be decided themselves, whether they will continue that privilege. But public transport should not be impaired by electric cars.