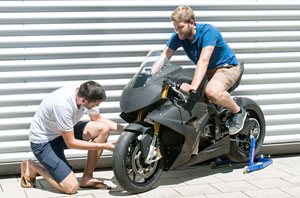 Sino-German e-motorcycle: Students from German TU Munich and Chinese Tsinghua University have developed a race electric motorcycle. The T0RR boasts 100 kW and 240 Nm torque. It will compete at speeds of up to 25 kph at the ‘Pro Thunder Race Series’ against combustion engine bikes. The motor has been installed backwards, so it runs opposite to the wheels.
springerprofessional.de (in German)

Electric two-wheeler: The M-1 by Bolt Motorbikes is a mixture between an electric moped and a motorcycle. Its economy mode keeps it strictly within Californian bicycle regulation that allows for motorisation of up to 1,000 W and 20 mph max. The pedals are more decorative than useful, particularly when going off-road with up to 5,500 watts and speeds of up to 40 mph. The e-bike weighs 63.5 Kilos and costs 4,995 dollars.
gizmag.com

H2 ferry: Sandia Labs and Red and White Fleet have embarked on project SF-BREEZE (San Francisco Bay Renewable Energy Electric vessel with Zero Emissions). The aim is to develop a fuel cell passenger ferry that will be recharged at what is to become the world’s largest hydrogen refueling station.
greencarcongress.com