Hungary privileges electric and hybrid cars as the Eastern European country plans to hand out green license plates by the end of this year. Replacement costs 8,500 forint (about 30 dollars) but that money might buy the right to drive in bus lanes and reduces parking and motorway fees.
bbj.hu

Czech electric bus: In Prague, locally built electric buses are being tested and could go into service as early as September. The project is run by Prague Public Transit Company (DPP) and Czech bus manufacturer SOR Libchavy. Via pantograph charging, range can increase from 150 to 260 km.
eltis.org 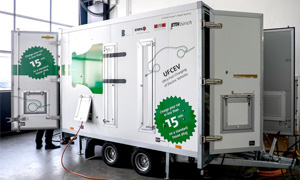 Fast-charging via battery: The UFCEV (Ultrafast Charging of Electric Vehicles) station, developed by Empa, ETh Zurich and others, is said to charge an EV in just 5 minutes in the future. It is basically a large battery packed in a car trailer. While it takes an hour to charge the 230 V power pack, the battery – made from lithium iron phosphate cells – discharges in currently 20 minutes through charging an EV.
ee-news.ch (in German), ufcev.epfl.ch (project’s website)

EV chargers were installed in British Dorset and Weymouth. A total of four fast-charging points can be found in various carparks in the English coastal towns. Rapid charging costs 4 pounds for the first 60 minutes with a pay-as-you-go tariff. The stations were funded by the UK government.
dorsetecho.co.uk

Truly a gas station: Linde opened a hydrogen fuel spot at the Ramos Oil Company station in West Sacramento. It is the first in the United States that has been certified as “officially open,” meaning it can be used just as any other “traditional” pump.
automotive-business-review.com