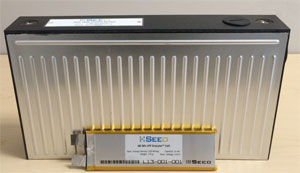 Bosch buys battery startup: German industrial giant Bosch will acquire Silicon Valley battery firm Seeo, including all of its intellectual property and research staff. Seeo is known for its advancements in creating high-energy lithium-ion batteries based on a nano-structured polymer electrolyte, using solid state technology that avoids the use of a flammable liquid electrolyte.
electric-vehiclenews.com, qz.com, ibtimes.co.uk

Panasonic to focus on EV batteries: The Japanese battery maker will stop making lithium-ion batteries for mobile phones and digital cameras at its factory in Beijing this month. It instead plans to focus on higher-margin products such as electric car batteries in the future.
yahoo.com

Formula E to increase power limit: The next ePrix season will see an increase of maximum power output from 150 kW to 170 kW for race mode. The all-electric championship is due to publish the draft regulations for its second season later this week.
autosport.com, motorsport.com

Vehicle2Coffee: The Mobility House has integrated an electric car into the grid. At its headquarters in Munich, the office and coffee machine are now powered by a Nissan Leaf via a bi-directional DC charging system from Endesa and Nissan.
insideevs.com; mobilityhouse.com (in German)