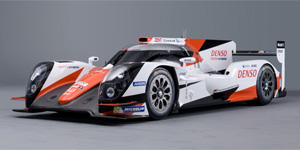 Toyota endurance racer: The TS050 is set to race in the 2016 World Endurance Championship and Le Mans 24 Hours, where the Japanese will go up against German Audi and Porsche. While specs have yet to be released, Toyota’s hybrid will boast 740 kW from a V8 coupled with electric motors.
carscoops.com, motorauthority.com

Google pods in London? The British capital is in “active discussions” with the internet firm to trial its self-driving electric cars. London hopes to i.e. decrease costs for tunnels in the future, as they could be build more narrowly. Overall, the UK government plans to invest 20m pounds in eight driverless car projects. Google has not yet taken its pods outside the U.S. and has not commented on London’s drive.
sky.com, theguardian.com

A 1,000 km stretch of solar streets will be installed in France over the coming five years, Ségolène Royal announced. The so-called Wattway is a joint project by French infrastructure firm Colas and INES (France’s National Institute for Solar Energy). The photovoltaic panels can carry trucks and each km generates enough energy for 5,000 homes. Testing could start as early as spring, given administrative details are sorted out.
autoblog.com, takepart.com

Half a million bucks for hybrid trucks: Inventev received a 500,000 dollar grant from the Department of Energy ARPA-E to develop and test its plug-in hybrid technology for heavy duty vehicles. Research and trials of the Energy SWAT Truck will be carried out on NextEnergy’s microgrid campus in Detroit.
ngtnews.com, inventev.com