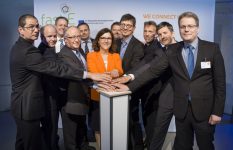 In Europe, range anxiety will soon be a thing of the past. With its project Fast-E, charge point operator (CPO) Allego wants to install a total of 278 fast-chargers in Germany and Belgium by June 2017. The first 28 locations (21 in Germany and 7 in Belgium) are already online. As for the remaining 250 chargers, Allego is confident that it will be able to set them up before next summer, if not earlier.

Fast-E is the biggest European charging project in terms of the number of chargers, as well as in terms of funds. In Germany, 241 rapid-chargers will be erected in a 70 to 80 km interval, another 37 in Belgium. The total investment amounts to 18m euros – “only” 50 percent of which are covered by the European Union. The other half of the bill is footed by Allego itself, which means the company is more than keen on making sure that all charge points function properly at all times. And to make sure that current investments are not just thrown to the wind, the charge point operator has taken its location planning a step further: current charge points can only deliver up to 50 kW, but Allego already fitted the local grid with the necessary transformers to allow for 150 or even 350 kW charging. So once EVs get more power hungry, Allego simply needs to exchange the charger to feed them properly. But there will be no need to rewire the location.

EU means: anyone is able to plug in

Allego is a subsidiary of the Dutch utility Alliander and has been setting up EV charging stations since 2013. When applying for EU-funding, they intentionally chose to look beyond their own market, as the Netherlands already have a tight charging network. Moreover, it has made it its motto that everyone can use and pay at their stations.

That – and the EU’s decision to endorse CHadeMO in multi-standard chargers in 2014, while European carmakers are betting on CCS and Type2 – means Fast-E is accessible to every (serial produced) electric car. Two EVs can charge side by side – one AC, the other DC. Also in terms of charge cards, Allego is not looking to keep anyone stranded. ChargeNow, PlugSurfing, The New Motion and intercharge direct can already be used to plug in. Talks with other mobility service providers are underway. Some Fast-E locations not only have a triple-charger, but another one (or two, or three) with CCS only. That’s because the operator is also part of the German initiative SLAM, which stands for “Rapid Charging for Axes and Metropolitan Areas.” And why not use a location for both? It’s safe to assume that since Allego is looking to earn money, it chose a site with many EVs. And if there are many EVs, an extra plug or two is surely appreciated.

Meanwhile,  a twin project also by the name of Fast-E is already underway in the Czech Republic and Slovakia. Headed by E.On (not Allego), it will see the installation of 15 rapid-chargers in each of the two countries. The idea is that the Eastern European project “connects” to Germany and that EV drivers will be able to use their charge cards for both initiatives.

Three Fast-E locations have been fitted with old EV batteries from Renault Zoe that can be used to store a surplus green energy. That stabilises the grid, on one hand, and can on the other be quite profitable when energy prices are negative. In that case, Allego will even get paid to take excess energy. Moreover, the company is testing whether the batteries can provide an extra boost, as in some countries or locations, the grid alone cannot provide enough power for fast-charging.

In conclusion, charging infrastructure in Europe is well on its way. That means: curtain for more electric vehicles. Allego says that it has seen the EV market grow and the operation of charge points becoming profitable in the Netherlands. It is therefore confident that the same will happen in Germany and across the rest of Europe. Certainly, enabling electric driving in Germany and Belgium will not be the company’s last endeavour.