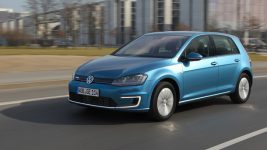 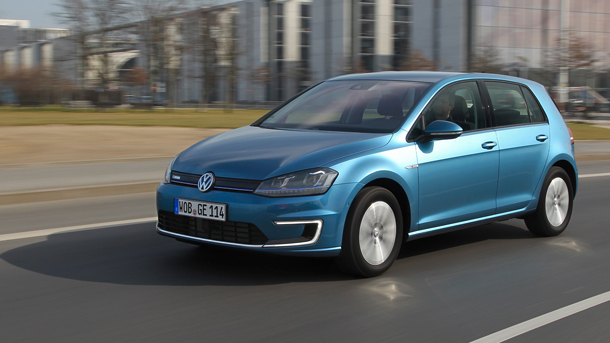 The VW e-Golf is getting an overhaul that will (most likely) hit the road later this fall. The lithium-ion battery will then have a capacity of 35.8 kWh; that is an increase of nearly 50 percent compared to the current 24.2 kWh. Dr. Volkmar Tanneberger, Executive Director of Electrics and Electronics Development at VW, confirmed rumours during a press workshop taking place during to the Formula E in Berlin over the weekend. That would mean that Volkswagen is leaving BMW and Nissan in the dust. The Bavarians are launching the next-generation of its i3 this summer, featuring a 33.2 kWh battery pack. The current Nissan Leaf can meanwhile store 30 kWh. And other than its competitors, Volkswagen will no longer sell the EV with an “old” battery version. “We are betting on the new generation,” says Volkmar Tanneberger, referring to the prismatic battery cells that now have 37 Ah, instead of 25 Ah. BMW and Nissan, on the other hand, continue to offer the smaller battery as an option. The one thing that all three models have in common is a 300 km range according to NEFZ, which translates to about 200 km in real life. And Tanneberger did not want to promise any more than that. He also could not say anything about pricing, as a “pricing commission” has not yet reached a final verdict.

With the facelift, the e-Golf also boast more power: instead of 100 kW, the new version can now use 120 kW from the traffic light. With its 125 kW, the BMW i3 will most likely out-speed the Volkswagen, while the latter will definitely leave the Nissan Leaf with its 80 kW far behind. Too bad that Volkswagen did not copy BMW in installing a 11 kW onboard charger for three-phase charging. At least that won’t be case in Germany, where the e-Golf will continue “fill up” with a mere 3.6 kW at an AC charger or wallbox. So it’s best to bring a good book. According to Tanneberger, it’s a question of cost. “We have to draw the line somewhere,” he told electrive after the event. VW will instead focus on DC fast-charging with up to 50 kW at CCS-chargers. Considering that German cities continue to predominantly install 11 kW AC and not 50 kW DC chargers, those words provide little comfort. Nissan at least offers an optional 6.6 kW onboard charger to top up the 30 kWh battery in 5.5 hours at the 11 kW charger. 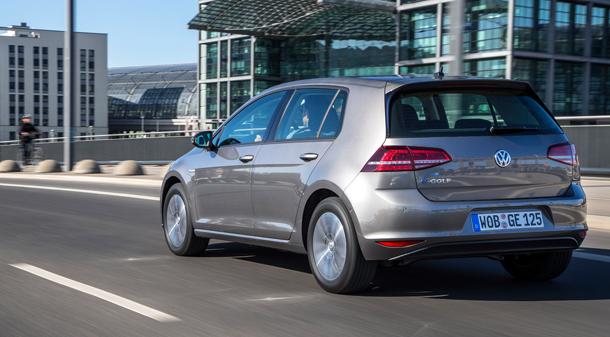 It’s also interesting to note that VW counts the updated e-Golf as one of the 20 “new” electric models that the group wants to launch by 2020. If one also subtracts the facelifted Audi A3 e-tron, we are left with far less “real” innovations than we had hoped for. But that is not surprising: the carmaker’s Modular Electric platform (MEB) will not be ready before 2019 (at the earliest). Volkmar Tanneberger already considers other electrification platforms – i.e. for delivery vans or sports cars. “That has still not been determined,” he says. But it is certain that Volkswagen as well as the group’s other brands will definitely need these architectural platforms. The integration of electric mobility in the current platforms (MQB, MLB) might in the beginning make sense from a financial standpoint, but has proven as anything but “ideal.” Too many compromises have to be made to produce cars with electric motors and combustions engines side by side. With the MEB and VW’s so called “chocolate batteries,” however, the manufacturer could play with wheel diameter, seating position, vehicle width, wheel base and range. “In the future, the car will be built around the battery,” says Tanneberger. Too bad that won’t already be the case for the new e-Golf.