High battery sale expectations: Panasonic expects sales of their electric vehicle batters to double in the next three years. The increased demand will be generated mostly by the opening of the Tesla Gigafactory and the rising demand for the EV maker’s Model 3 – in both cases, Panasonic will be the exclusive supplier of battery cells.
reuters.com 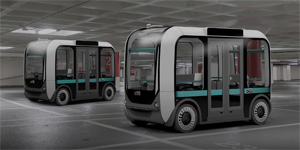 Olli bus in Berlin: Olli, the autonomous all-electric bus from Local Motors, equipped with IBM’s Watson technology, will be also produced in Berlin once a suitable manufacturing facility has been found. It should hit the streets of the German capital early 2017.
wiwo.de (in German), meetolli.auto

Rechargeable nanowire: Researchers at the University of California, Irvine, have developed a nanowire-based battery material that can be recharged hundreds of thousands of times. They a gold nanowire in a manganese dioxide shell placed in an electrolyte made of a Plexiglass-like gel. This could mean that EV batteries would never have to be replaced.
electriccarsreport.com