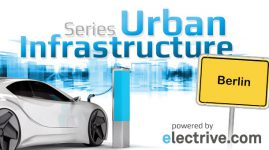 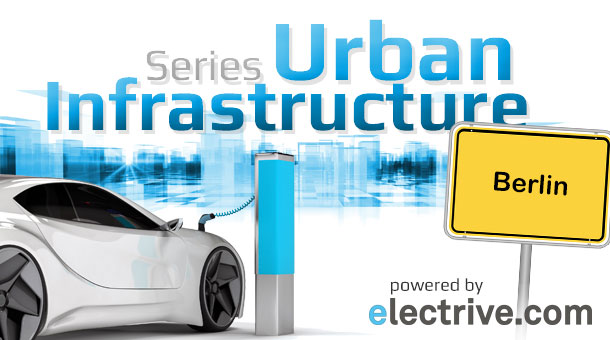 How do electric cars get cleaner energy and cities better air? The new series Urban Infrastructure from electrive.com highlights the different strategies with which cities in Germany and Europe develop infrastructure for electric vehicles. After Hamburg and Stuttgart, electrive.com Editor-in-Chief Peter Schwierz takes a critical look at charging infrastructure in Germany’s capital Berlin. The fact of the matter is, the self-proclaimed capital of electric mobility is still lagging miles behind its own goals – and the isolated application it put into place is far from ideal.

FILLING STATIONS OF THE FUTURE 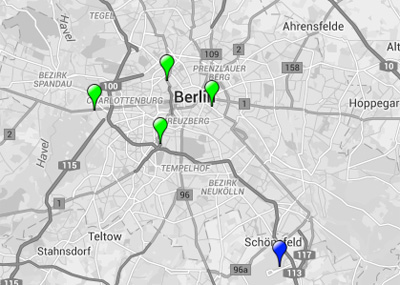 Before we look at charging stations for electric cars, let’s look at the infrastructure in place for fuel cell vehicles (which we at electrive consider part of electric mobility). Despite there only being very few FCVs on the road, Berlin already has four hydrogen fuelling stations and a fifth one is in planning. What is interesting to note is that these are all located at existing petrol-stations. Overall, it is safe to say that Berlin has hydrogen-powered cars covered.

For battery electric cars in Berlin, things are more complicated. Using money from an economic stimulus package, utilities Vattenfall and RWE pretty much used to split the cake between themselves. 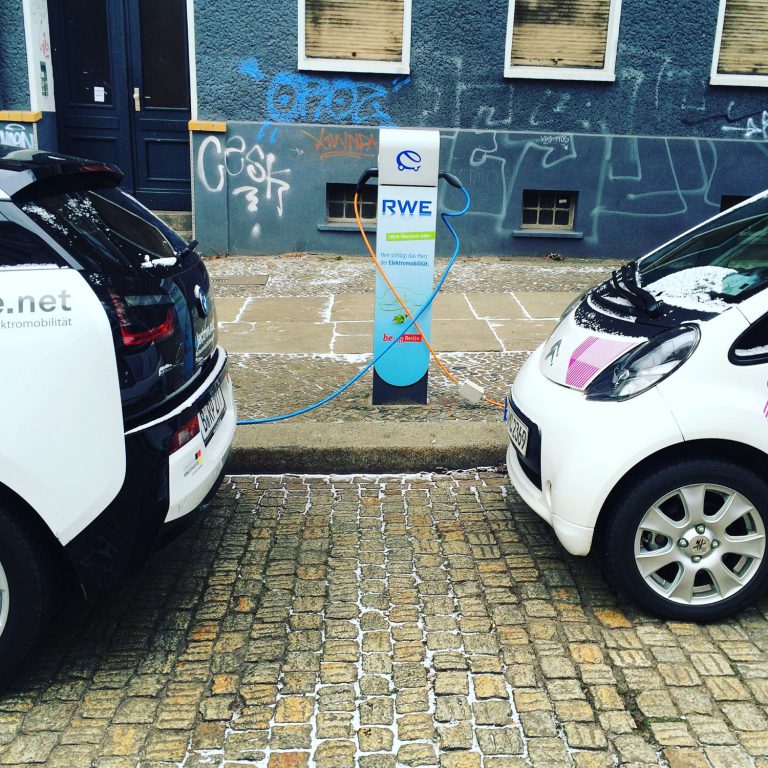 The former counted 96 AC chargers in Berlin at the end of May 2016, RWE 200 plus a few fast-chargers that were part of the showcase programme. The New Motion also has 51 chargers, mainly in parking structures, there are a handful of model chargers and the lamp post chargers from Ubitricity (which are more or less useless, as the city won’t reserve parking for EVs in front of them). For a city that’s 892 square kilometres in size, that’s not a lot of places to plug in. Anyone without a garage has to think twice (or more) about going electric, be willing to take the car to a charger 2 km away from home after dinner, hoping that’s not blocked, that the next tram will come right then to take you home, and when it doesn’t, be ready to be left in the cold.

HOPING FOR THE BERLIN MODEL

Berlin is one of five showcase regions for electric mobility in Germany. The plan was to establish standardised EV infrastructure in Berlin, which would serve as the base for “a more efficient and climate neutral urban transport of the future.” A total of 400 new AC and 20 DC fast-chargers were supposed to be installed – and quickly. That was in 2012. But the project “be emobil” took a little longer to get off the ground as the tender alone took two years to put into place. The first “be emobil” charger didn’t therefore go online until April 2015, at which point other showcase regions were already working on their final reports. And even then, the ball didn’t really get rolling. Charge point operator Allego, in charge of getting the infrastructure into the ground, had difficulties getting the final ok for locations, as many local districts weren’t keen on giving up already rare parking stalls. Setting up fast-chargers on public grounds wasn’t allowed at all. Monument protection was more important and placing a grey box on an historic street – no way! It took another year (!) for the project’s first rapid-charger to go live (on private grounds, of course). A current “be emobil” map show that the expansion is getting into top gear. Some 200 AC chargers were online at the end of May – whether all 400 will be standing by the end of September remains to be seen. 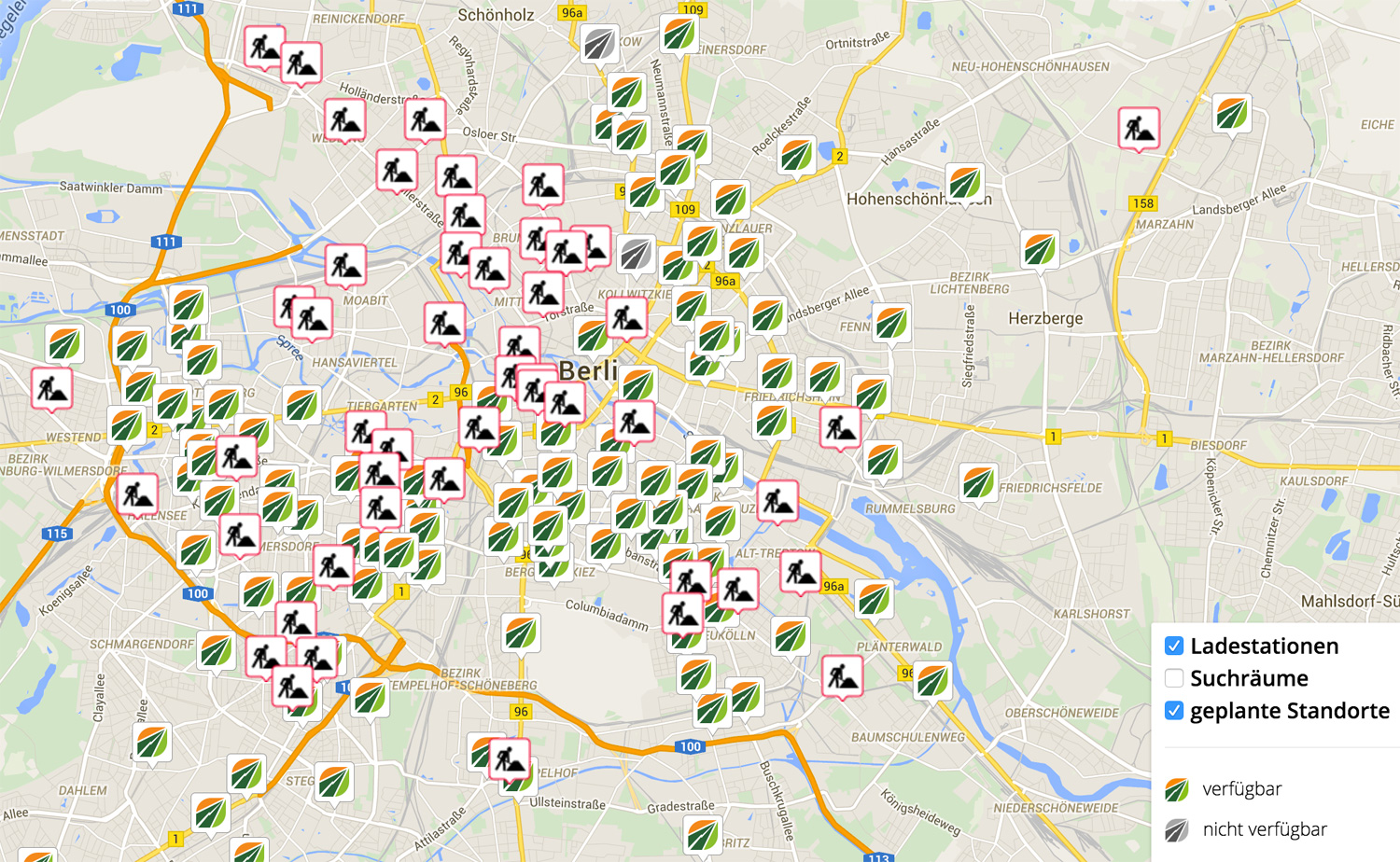 That the consortium commissioned with setting up charging infrastructure in Berlin is made up of two Dutch companies (Allego as CPO and The New Motion as MSP) is pure coincidence. Almost everyone was certain that RWE, Vattenfall and Ubitricity would win the deal, replace their hardware but keep the locations and simply extend their charging network together. Now, RWE is part of charging infrastructure consortium Hubject, Vattenfall can be used by anyone with a charge card from Ladenetz and the “be emobil” chargers use yet another solution. Because if things weren’t already complicated enough, Berlin has set up its own identification platform à la “we don’t depend on anyone, we make others depend on us.” In reality that means that every mobility service provider (MSP) like i.e. ChargeNow needs to negotiate with the Berlin government to set up a new IT interface – too much to ask of many MSPs. 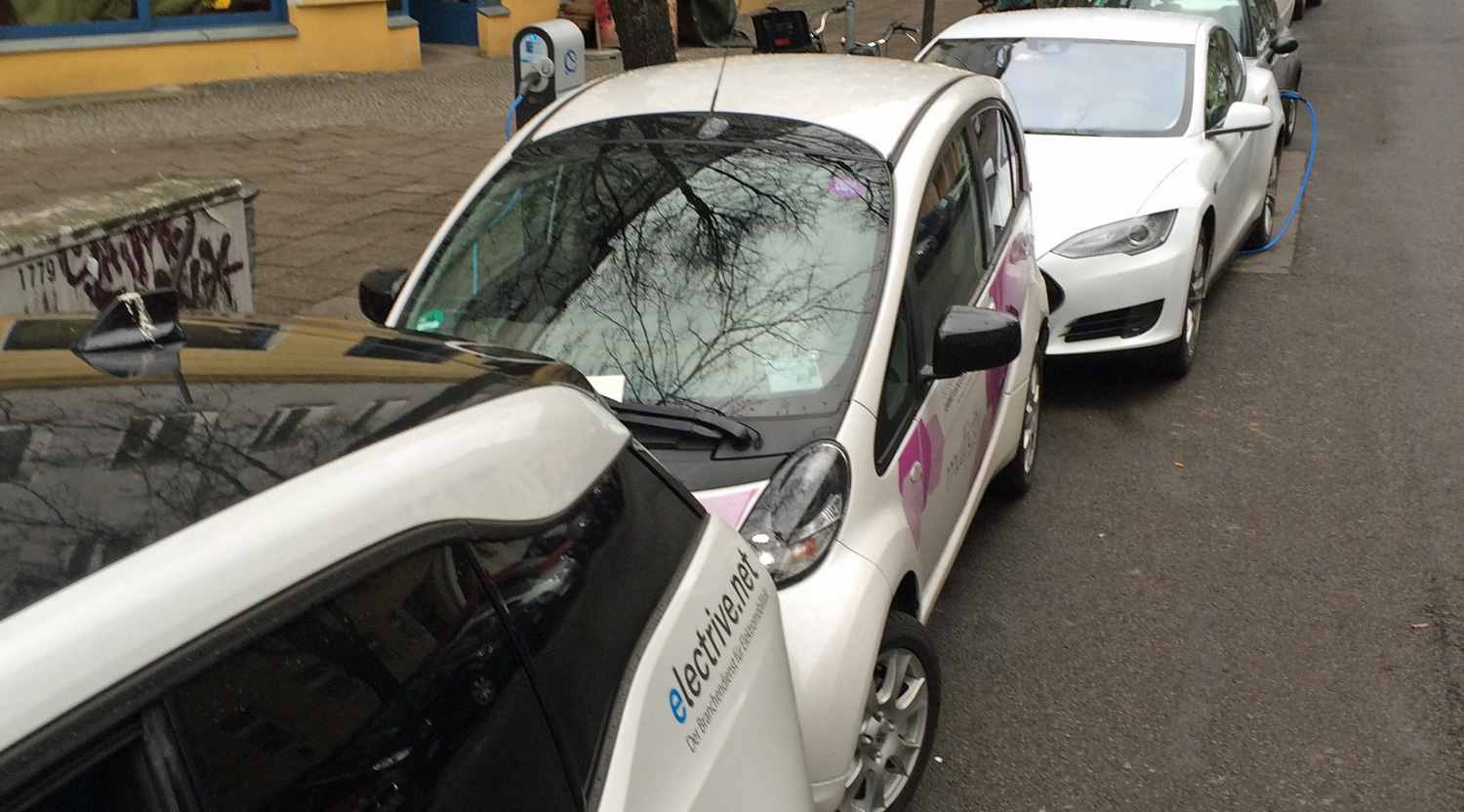 The disadvantage of time-independent models: fully charged carsharing vehicles remain put. Here, two other EVs are up in its grill and bumper. Picture: Peter Schwierz

If it were up to the Berlin Senate, RWE and Vattenfall need to retrofit their chargers or take them down all together. Many special use permits expire this year, and all attempts to compromise have failed. Vattenfall told electrive.com that it is interested in continuing to operate 12 locations in Germany’s capital, but since it only has four other AC chargers in Hamburg, there is really no base for it. RWE is a different story and the utility is even considering taking the matter to court. Maybe the men and women in suits just need to look at this from a different perspective and take into account what users want.

THE USER IS LEFT STRANDED

As a result of the isolated application, the new chargers are only slowly integrated into existing roaming networks and thus into on-board navigation systems (if at all). The author knows from experience with the BMW i3 that it doesn’t make finding the mousey grey chargers on the streets of Berlin any easier. And if you do find it, and it’s not blocked by a diesel or petrol car, then you need to have a charge card from The New Motion to use it. So much for anti-discriminatory access. BMW or VW drivers with a ChargeNow or Charge&Fuel card cannot use the new infrastructure. At least PlugSurfing provides a RFID key fob as an alternative, but that’s it. Ad hoc charging or unlocking the charger per app – keep dreaming. The digital wannabe city Berlin is sticking to RFID. Also, the Berlin Senate is very proud of the chargers’ data economy. In reality that means that more often than not, you don’t know what the charging process has cost you until about a month later. Unimaginable at a regular fueling station! And The New Motion app still cannot display the “be emobil” chargers’ status – something can do for its own infrastructure. 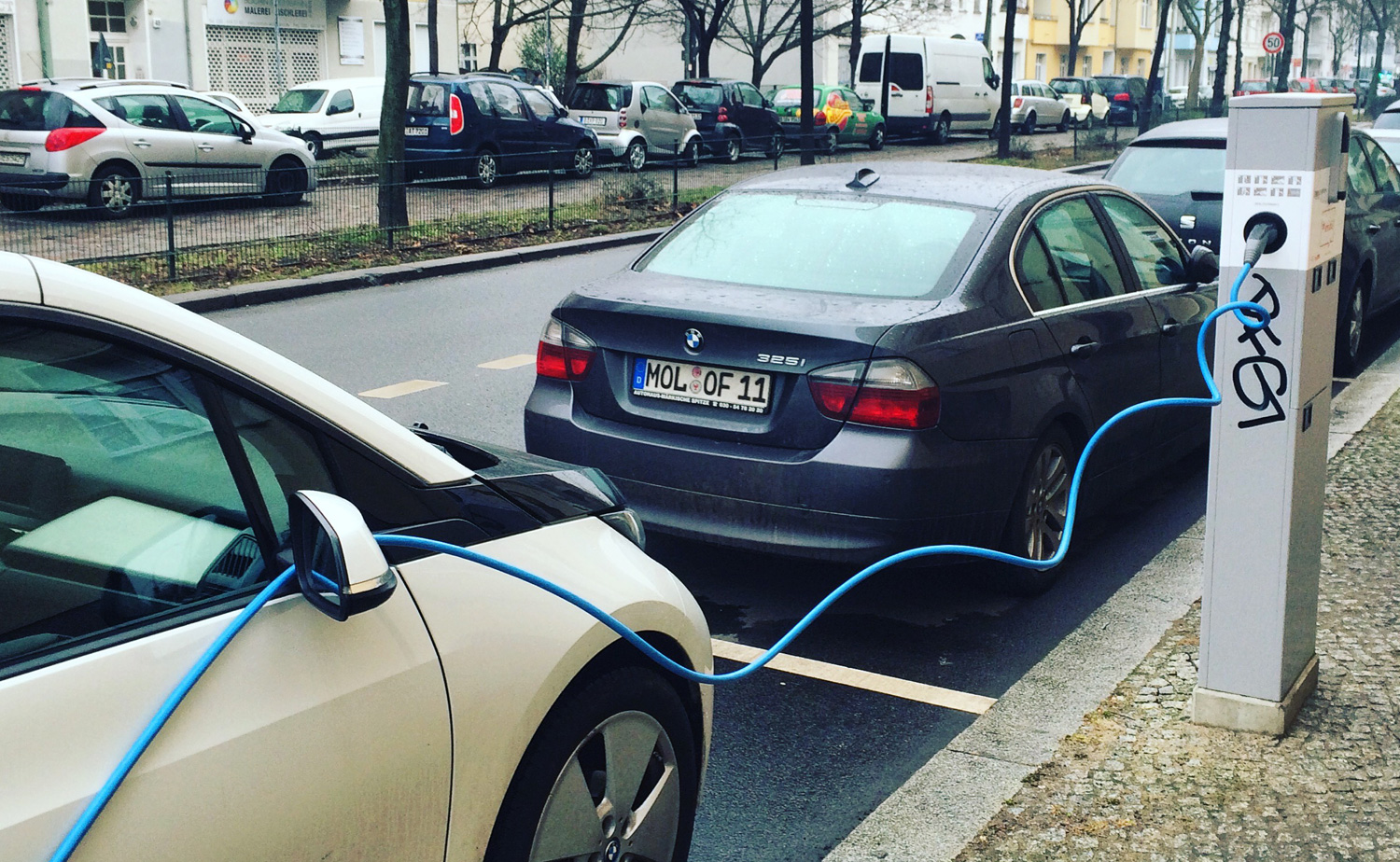 Typical: a commuter blocks the “be emobil” charger. And the city of Berlin isn’t really doing anything about it – EV drivers are of course ecstatic (not). Picture: Peter Schwierz

Pricing is another bête noire: Depending on what app you ask, it costs between 35 to 77 cents to start charging. The process is then invoiced per minute or hour. Plugging in costs 5 cents per minute or 3 euros per hour, though the prices drop during 10 p.m. and 8 a.m. Still, leaving the i3 to fully charge (about six hours) costs around 13 euros. That’s 13 euros for 100 km in the winter. RWE, on the other hand, charges per kWh, meaning the same amount will cost somewhere around 5 euros. And 13 euros per 100 km – a diesel would go twice as far for that price. Sounds petty, but that’s exactly how the many do the tally.

THE INCENTIVES ARE MISSING

In conclusion: Germany‘s capital hasn’t managed to give people enough reasons (or any reason at all) to drive electric. Charging in Berlin is expensive, not practical, and definitely not smart. And above that, electric cars don’t enjoy any other kinds of incentives either – no free parking, no using the bus lane, etc. And petrol-cars blocking charging infrastructure are left standing. So why, apart from one’s own conviction, should any Berlin resident drive an electric car?

Opposites in Berlin: the clean solution on the left, the more individual on the right. Picture: Peter Schwierz

It’s debatable whether every street really needs numerous AC chargers, like in i.e. Amsterdam, or if more DC-chargers are a better way to go. But the fact of the matter is that the former showcase region, which really wants less cars and cleaner transport, is doing everything to enable the exact opposite and isn’t doing enough to push electric mobility – the charging infrastructure debacle being the perfect example.