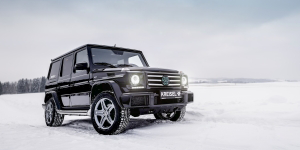 Electric surprise: Kreisel Electric and Arnold Schwarzenegger presented the first electrified G-class in Kitzbühel this weekend. The Austrian battery specialist electrified the Mercedes G 350 d (model year 2016) in just two weeks. The now electric SUV offers 300 km of range and can charge with 80 kWh. Meaning it can be charged up to 80 percent in just 25 minutes.
electrive.net (in German)

Tesla without the P: Tesla now offers a 100D variant of its Model S and X, so without the “Performance.” It accelerates a little slower than its P-counterpart, but offers a higher range at a considerably lower price. The Model S 100D costs 42,000 dollars less than the performance version and the price of the Model X drops 37,000 dollars. Also interesting: the 100D versions only cost 3,000 dollars more than the 90D models.
teslarati.com, insideevs.com (Model S), insideevs.com (Model X)

E-Tense could become a reality: There are more and more clues that the DS E-Tense, which was presented in Geneva last year (we reported), will reach serial production. However, according to Autocar, it could take the PSA Group until 2021 until the electric sportscar will be available for sale.
autocar.co.uk

Electric Beetle in the works? According to Klaus Bishop, VW’s head of design, it’s a real possibility. The issue is being heavily debated, but no final decision has been made so far.
electrek.co, vwvortex.com, automobilemag.com

Join us at rEVolution 2017, the annual speaking & networking event exploring new developments within the industries of sustainable transport and electric mobility! Attend keynotes from thought leaders at Engie, Rexel, CleanTechnica & more, and receive an exclusive publication of the “Manifesto of Electric Mobility”! Get tickets >>

Maybach GLS as PHEV: Mercedes wants to add a Maybach GLS to its SUV offering, Autocar reports. The Maybach SUV will launch in 2019 and will also be offered with a plug-in hybrid drivetrain.
autocar.co.uk

GreenTech looks ready to fold: The U.S. company that had wanted launch the electric two-seater MyCar (we reported) may be ready to call it quits. Part of the staff has been let go, while the factory in Mississippi will be closed. U.S. media reports that GreenTech is having trouble paying back a state-issued loan on time.
greencarreports.com, washingtonpost.com